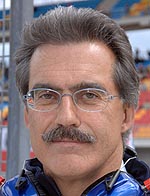 BMW has covered 9,445 kilometres in testing with the F1.09 in Valencia, Sakhir, Jerez and Barcelona in preparation for the team's fourth season in Formula One. Working out the relative performance levels of the teams has probably never been trickier. Basic rule changes have produced fundamentally different cars. The opening race of the World Championship will take place in less than two weeks - on 29th March - in Melbourne, Australia.

Mr Theissen, is the BMW Sauber F1 Team well prepared for the new season?
Mario Theissen, BMW Motorsport Director: "Yes, things are looking good after all the testing. The drivers and the engineers have given positive feedback. We are heading in the right direction with the BMW Sauber F1.09."

What have been the biggest technical challenges?
MT: "The engineers have had to adjust to fundamental changes in four different areas. There are new developments to be considered in terms of aerodynamics, tyres and KERS technology. Plus, the engines have to cover twice the mileage this year compared to 2008. Never before in Formula One have they had to last so long. The changes to the cars' aerodynamics are so fundamental that the engineers really did have to start again with a blank sheet. The introduction of KERS brake energy regeneration technology into Formula One also represented new territory. This has been a huge challenge, one which we have taken on with great drive and determination. When I look back at how far we have come in such a short space of time, it really is very impressive. Here, Formula One has taken on the role of technology accelerator for series production cars of the future."

Will you be using the Kinetic Energy Recovery System (KERS) in Melbourne?
MT: "We've got our KERS to the stage where it is race-ready, which means we can use it in Melbourne. Now it's just a matter of weighing up the pros and cons. On the positive side, the drivers would have an extra 82 hp at their disposal for 6.6 seconds per lap. However, the system adds weight to the car and this has an impact on the car's weight distribution and tyre wear. We will make a decision on a driver-by-driver, circuit-by-circuit basis."

Does KERS place heavier drivers at a disadvantage?
MT: "The minimum weight of 605 kilograms stipulated for the cars in the regulations includes the driver. The difference between the actual weight and minimum weight is levelled out by positioning ballast around the car to optimum effect. Traditionally, this means that a heavier driver has been at a disadvantage, as he has had less ballast to balance out the car. Using the KERS will further reduce - by the weight of the system - the amount of ballast available. In order to prevent Formula One from becoming a jockeys competition, we are pushing for an increase of the minimum weight in the future."

How do you assess the significance on a political level of the Formula One Teams Association (FOTA) for the future of Formula One?
MT: "There has never been such unity between the Formula One teams as we are seeing now. At the first FOTA press conference in Geneva at the start of March, Chairman Luca di Montezemolo spoke - with good reason - of an historic event. The teams have come together within FOTA to provide an equal partner for the FIA and FOM."

What are your key aims?
MT: "Our common aim is to reduce costs without taking away the ingredients that make Formula One so captivating and so attractive. For example, we have cut the amount of testing allowed by half for 2009 and placed restrictions on the use of wind tunnels and supercomputers. These steps will be followed by a much more extensive package of measures in 2010. The top category of motor racing remains a unique mixture of cutting-edge technology, sport, business and glamour. However, times have changed and Formula One has to adapt accordingly. I think our sport is heading in the right direction."

What kinds of cost-saving measures has the BMW Sauber F1 Team already taken?
MT: "We have supported cost-saving measures for a number of years and have always pursued a policy of moderation. From its formation, the BMW Sauber F1 Team has focused on efficiency and reduced its expenditure each year. Today, BMW is spending 40 percent less on its involvement in Formula One than in 2005. Back then we were an engine supplier, but now have our own team, of course. Significant savings have been achieved through increases in the mileage required of each engine. When BMW returned to Formula One in 2000, we were using one engine for free practice, replacing it for qualifying and then fitting another new one for the race. This outlay has since been gradually reigned in and today each driver has to make do with eight engines for the full duration of the season. The heavily reduced testing schedule has brought further substantial budget savings. Testing on race circuits is banned outside of race weekends until 31st December 2009. The only exception will be tests for junior drivers with no GP experience after the season has finished. So we have put together a whole package of measures to reduce costs."