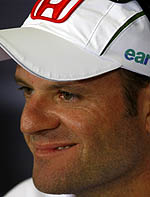 While Honda may not yet have officially informed him that he is to be dumped in favour of Bruno Senna or Lucas do Grassi, Rubens Barrichello clearly knows that his F1 career is at an end.

Sadly, however, rather than going off quietly to focus on a new career in IRL, in recent weeks the Brazilian has been dropping titbits to the media in much the same way as a spurned mistress.

Talking on a Brazilian TV show, Barrichello has now decided to "tell the truth" about what happened at the A1-Ring in 2002, as if none of us already knew.

Just yards from the finish line and a well deserved victory, Barrichello got the call, his team ordering him to move aside for teammate Michael Schumacher. It was a move which caused outrage among fans and was to lead to the re-writing of the rules, not to mention fines for all involved.

Speaking on Fantastico, however, Barrichello reveals that the call to let Schumacher past didn't come on the last lap.

"Do you know that Michael is behind you?" the team is said to have told the Brazilian. "It's important for the championship.

"The intensity of the conversation increased with every lap," he revealed. "And then I was told to think about my contract. For me it was clear... take your foot off the gas or you will be going home."

What happened next is history, the Brazilian slowed and moved aside within yards of the finish line, allowing Schumacher to extend his championship lead over Juan Pablo Montoya from 21 points to 27 points.

On the podium, clearly embarrassed, Schumacher invited Barrichello on to the top step, a move which caused further anger at the FIA.

However, the fact is that prior to the Austrian GP, Barrichello had scored 6 points from the first 5 races, compared to Schumacher's 44.

Furthermore, let's not forget that despite having spent much of 2000 and 2001 playing support to Schumacher, on Thursday 10 May 2002, just three days before the notorious A1-Ring incident, Barrichello inked a brand new two-year deal with Ferrari.

As editor Chris Balfe pointed out at the time he knew exactly what he was doing and the direction his career would subsequently take. It seems a bit rich to start complaining about it now.