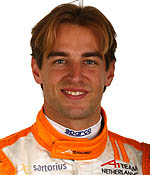 Local hero Jeroen Bleekemolen will start on pole position in the A1 Team Netherlands car for his home race, A1GP Zandvoort tomorrow after posting a superb lap of 1m 24.213 seconds in qualifying at Circuit Park Zandvoort.

Bleekemolen set the stunning lap with approximately 15-minutes to go in the session, and chose to sit out the final minutes while the rest of the field tried to beat his time. However, he ended up more than three tenths of a second quicker than A1 Team New Zealand's Earl Bamber. Ireland and Malaysia will start on the second row, with strong laps from Adam Carroll and Fairuz Fauzy respectively.

In a change from the usual format, the A1 Teams had a full hour of qualifying with their best time counting towards the grid position for tomorrow's race.

Ireland was fastest straight out of the box, going to the top of the time sheets by posting a 1m 28.012s time on its first flying lap, which was already faster than last year's A1GP lap record.

Loic Duval then took to the track for the first time this weekend for A1 Team France. Eighteen-year-old Daniel Morad ran off briefly while pushing hard but rejoined without any damage. John Martin was also back on track after the A1 Team Australia squad worked hard to get him out for qualifying after the car was damaged in practice earlier today.

Twenty-five minutes into the session the order stood as Ireland, Malaysia, Italy, Monaco, USA and then New Zealand. However, A1 Team Netherlands took provisional pole position as Jeroen Bleekemolen smashed Ireland's time, recording a lap of 1m 25.422 seconds. Almost immediately, the red flags were out as A1 Team Korea's Jin Woo Hwang hit the barrier at turn seven.

With the clock still ticking down, there was just under 39-minutes left when the session restarted. Several cars came straight out on track, including Ireland who re-took pole position from Netherlands with a 1m 24.760s.

Charlie Kimball moved up to fourth with an impressive lap, despite the Californian having done very little running in the US car. The Californian is in the cockpit for the USA this weekend after it was announced earlier this week that American team Andretti Green Racing would run the US entry in A1GP this season. Team co-owner Michael Andretti flew into Zandvoort this morning to announce to the world's media his plans for the squad's driver line-up, confirming that both his son, Marco, and renowned female racer, Danica Patrick, are in the team's plan to race this season.

At just past the half way point the red flags were out again as Indonesia spun at turn ten. After the car was recovered, the track opened for the final twenty-minutes of the session with Ireland still quickest. Netherlands responded but while Bleekemolen was pushing hard for pole, Malaysia's Fairuz Fauzy briefly snuck ahead into second position. Netherlands next lap of a 1m 24.290s was good enough to put them back ahead before Bleekemolen put in a stunning lap recording a 1m 24.213, going 0.547s faster than Ireland and good enough for pole. The red flags then came out for a third time as John Martin ended Australia's qualifying session with only 12-minutes left on the clock.

With just under eight minutes to go, the track re-opened, Portugal made its first laps of the weekend with Filipe Albuquerque at the wheel. With Jeroen Bleekemolen choosing not to go back out a tense final few minutes ensued, while he watched his competitors try to beat his time.

In an action-packed end to the session, Switzerland's Neel Jani moved up to fourth. Clivio Piccione briefly held third in his maiden qualifying session for A1 Team Monaco, ending fifth at the chequered flag. Monaco, is one of two new nations on the grid this year, alongside Korea, and Piccione was happy with his performance despite getting caught up in traffic.

Clivio Piccione said: "We went into Qualifying initially on an old set of tyres to get a base line set-up. The track was even windier than in the morning, so the car was a bit snappy. Unfortunately I had a bit of traffic on my flying lap, which is a shame as the performance and grip were there, but overall I am happy with the result; to be in fifth place for the start of our first race in the championship is a good result."

With four minutes to go New Zealand put in a fantastic lap to go second. Eighteen-year-old Earl Bamber put in an impressive performance to put Black Beauty on the front row of the grid in preparation for his first ever A1GP race start.

"I knew it was going to be a difficult weekend for me," said the Kiwi. "It's a big step up from what I have been racing in the past, but Colin (Giltrap) has given me a fantastic opportunity this weekend, although the biggest thing was learning the circuit. The Zandvoort circuit is incredibly hard, Jeroen has driven a million laps around here, so for me it was just a case of leaning the circuit but it's really nice. I absolutely love it with the up and downs as it's very different to what we have at home in New Zealand."

Malaysia put in a late charge to move up from fifth to third, and as the final seconds ticked away the order looked set, but a final charge from Adam Carroll saw him snatch third back from Malaysia by 0.022s to put the Celtic Tiger on the second row for tomorrow's race.