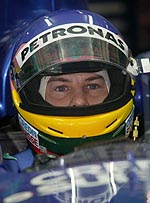 Bad weather is closing in on the Ardennes, with rain now expected to affect all three days of the Belgian Grand Prix weekend.

The rain is due to start today (Thursday) with further downpours expected for the next week. Furthermore, temperatures are expected to rise little more than 16 degrees C over the course of the weekend.

Over the years, mainly due to the circuit's location, and the timing of the event, race fans have witnessed numerous wet races at Spa, one of the most memorable being the 1998 event when 15 cars were involved in an incident at the first corner (La Source). Later in the race, leader Michael Schumacher collided with David Coulthard, an incident which led to the German marching to the McLaren garage and accusing the Scot of trying to kill him. The race was eventually won by Damon Hill, giving Jordan its first ever Grand Prix victory.

The 2005 event, eventually won by Kimi Raikkonen (McLaren), was also hit by heavy rain, and is remembered for Antonio Pizzonia taking out his Williams teammate, Juan Pablo Montoya, who was running second, and Takuma Sato T-boning Michael Schumacher.

While some drivers pitted as many as five times, a one-stop strategy saw Jacques Villeneuve (Sauber) finish sixth. No doubt Renault will be eyeing a similar strategy this weekend.