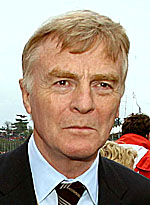 Over the years, many politicians, businessmen, celebrities and even religious figures have had their careers derailed by revelations concerning their private lives.

Be it snorting Colombian marching powder, seeking company on Hampstead Heath or being trussed up, a plastic bag placed over your head and a Satsuma shoved up your jacksie, the great and the good have quickly tumbled from favour once their (by normal standards) unsavoury desires became public.

This should have been the case with Max Mosley also, once the News of the World exposed his predilection for sado-masochistic sex.

Those who take a 'nudge-nudge, wink-wink' attitude to life however, dismissed the 68-year-old's antics, admitting quiet admiration for a man who can entertain five hookers for several hours at a time of life when he should be enjoying nothing more demanding than a Radox bath followed by a mug of Horlicks. The rest of the world however, went stark raving mad, with claims that Mosley's private life would destroy Formula One and pretty much the rest of civilisation.

Speaking in Monaco yesterday, just a few days after his victory in the High Court, and as he begins numerous libel actions, Mosley effectively said that in terms of scandal, times have changed.

"The idea that has been put around is that if someone is the head of a big company, they would have to resign," he told the Financial Times. "That was true 20 years ago but if you take someone like Lord Browne, the (former) head of BP, I don't think he had to resign because he was gay and had a rent boy, as they call it. He had to resign because he told a lie about it. You mustn't lie about what you have done.

"People are interested in whether you can do the job," he continued. "If someone is the right man for the job and there's no one around who can do it better, you'd be crazy to throw him out because of something he does in his private life. Times have moved on."

Once the scandal broke in late March, following a short delay - probably while the shock set in - there was outrage within the sport, as FIA member clubs, manufacturers, Bernie Ecclestone and various others called on Mosley to stand down, claiming that his continued presence as FIA President would do irreparable damage to the sport.

Rather than bow his head, write the resignation letter and walk into the shadows however, the Englishman went head-to-head with the British media, and won. While some call his victory pyrrhic, and others claim that the ruling is effectively a licence for the rich and powerful to do whatever they want, others claim that Mosley's win was a victory against gutter journalism. Furthermore, there are many who, if only secretly, applaud Mosley's decision to take the fight to the media.

"What's good is that the publicity about it, particularly in the News of the World and Daily Mail, has been so outrageous that in future when people find themselves in my position and ask for the thing to be held in camera, which is in the discretion of the judge, they'll get a sympathetic hearing," he said, "because what is the point of a privacy hearing if it is massively public?"

Referring directly to last week's court ruling, he added: "It stopped all the nonsense about Nazism and in terms of my ability to do the job."

He is now suing the News of the World and Germany's Bild for libel, with the threat of further actions against publications in various other European countries, including France, where if pictures taken in private and without consent are published, the editor can be jailed for a year. "That would be very funny," admits Mosley.