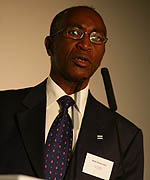 Speaking to The Express in the wake of the vote, in which Max Mosley received the resounding support of FIA member clubs, Ecclestone said: "Will Prince Albert of Monaco hold a cocktail party for Max now? Just because he got a few more votes from Africa doesn't mean King of Spain will want to shake his hand."

"There is an article in the Daily Express of 4th June 2008 on the FIA Extraordinary General Assembly proceedings where Africa has been focused. The facts are, Africa has 36 clubs and even if all the clubs had voted one way or the other, the end result would not have changed.

"With regard to the remarks, 'Just because he got a few more votes from Africa …', the African clubs take great exception in what is clearly derogatory, demeaning and uncalled for attacks on Africa. In more than 30 years of my close relationship with AIT/FIA, this is the first time to come across such subtle and thinly veiled attacks based on ethnicity and we expect withdrawal and apology to Africa if there was no motive behind these remarks."