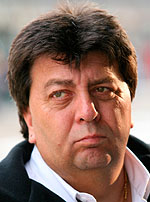 A1 GP boss Tony Teixeira has admitted that while he had been interested in purchasing an F1 team in 2007, having been linked with Spyker and Toro Rosso, the decision to ban customer cars made such a move unfeasible.

At a time when the sport risks losing Super Aguri, Teixeira is just one of the names being touted as a possible buyer, should the price be right. However, talking to Reuters, the Portuguese-South African has admitted that while F1 had been on the agenda in 2007, this was no longer the case.

"We wanted a team n F1 where our winners from the A1 GP series would go and race in F1," he admitted. "The reason for that has always been that every kid's aspiration ultimately is to end up in F1."

Originally, he had looked at Spyker, but when the Silverstone based outfit was purchased by Indian billionaire Vijay Mallya attention turned to Toro Rosso. Talks were held late last year, Teixeira admitted, but these subsequently fell through.

"We wanted to be running at the top, and that means top 10," he explained. "The only way we were going to achieve that was with the customer cars. In other words, we were going to be the Ferrari B team and that's why I was willing to buy Toro Rosso.

"Initially it was Spyker," he admitted, "because I already had a deal with Ferrari and that was the biggest thing that attracted me. I then made way for Vijay to buy Spyker because Bernie (Ecclestone) needed India and I said 'Fine, I'll make way and look more favourably at Toro Rosso', which had a similar agreement with Ferrari. I sat with Toro Rosso and when we were close to a deal, F1 changed the rules: No customer cars. When they changed the rules, I was through.

"As you know, Prodrive walked away," he continued, referring to David Richards' outfit which had won the coveted 'twelfth slot' at a time when customers cars were to have been allowed. "That was going to be the McLaren B team. It was going to be Red Bull running with Renault, Williams with Toyota and Aguri with Honda. That makes sense to us because there was no way we could go and develop our own chassis and be competitive.

"I don't profess to have that kind of money," he admitted, "and even if I did I wouldn't put it into F1, it would be madness. All we were looking to do was promote A1 through F1, because we still believe F1 is the biggest promoting machine available."

With the future of Super Aguri hanging in the balance, Teixeira admits that he would be interested... but only if the rules regarding customer cars change. And that is highly unlikely.

"If the rules change, we will be the first guys to look for a team," he admitted. "I think everyone knows that, Dietrich Mateschitz knows, while I have explained to Super Aguri that I can't be Honda and Ferrari.

"If the rules change, I would look for a spot in F1. If the rules don't change, there's nothing in it for us."

Since the emergence of A1 GP, Bernie Ecclestone, who was initially dismissive of the series, has become a very close friend of Teixeira's, the two having much in common, not least their reputation for being hard-nosed scrappers. While Teixeira recognises the value of F1, Ecclestone has seen elements of A1 GP which clearly interest him. Together, they would make a formidable team.