Raikkonen: Anything can happen 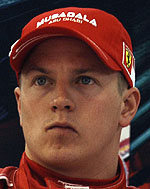 Kimi Raikkonen was extremely satisfied when he left China, after the two races in the Far East. "I was really happy on Sunday night: we couldn't get the maximum in China and Japan, but we showed that we were able to win both of the races, which was very important in view of the race in Brazil," he said.

"The situation seemed to be compromised after the race at Fuji, but in Shanghai we managed to put things straight. Now we have new hope to win the title and it's good to know that we can go to Sao Paulo and try our luck. It would have been better if also Alonso would have not made it, but Hamilton's retirement, his first this season, was very important. It has been since the race at the Nurburgring, when I had to stop with a hydraulic problem, that we didn't control the championship. We have to go on working the way we did at the last two races. We have to give our best to try to have another double win. We do have the possibility, as you could see. If we manage to do the same at Interlagos everything depends on what our competitors can do."

Before the race Kimi was convinced that Ferrari could be competitive at Shanghai: "Since the first laps on Friday I knew that the car went really well under any weather conditions. We just needed to find the right setup for this kind of situation we had ahead of us: we checked on the weather forecast and we were well prepared. We knew that we would be behind in the first part of the race, but then we were able to up our game, once the track was dry. In the end it was exactly like that. We didn't get the pole although I had a very quick lap in Q3. Hamilton had less fuel in his car so it was much easier for him.

"At the start of the race, I had a lot of understeer but then the situation improved and I managed to pick up on Hamilton. Due to the yellow flags I had to wait a bit before I could pass him. I had to slow down a couple of times in some corners, when I was right next to him. There was no point in pressing too hard and throwing it all away. When the yellow flags were gone he took one corner slightly too wide and I benefited from this situation. Later I just had to remain concentrated and bring home the victory. At the end I was asked if that was the most beautiful victory with Ferrari: undeniably it was a very difficult one; the first one on a wet track; and it was really a great feeling. It could have been even better if there hadn't been the bitter aftertaste from what had happened at Fuji, with the rules handed out by the FIA without us having been informed."

Kimi doesn't hide his satisfaction that he is back in the title race: "We're back in the fight. After the one in 2003, when I came to Suzuka with nine points behind Michael, this is the second time that I will play it in the last race. Now I'm seven points behind Hamilton and three behind Alonso. Anything can happen in the race. There are more possibilities to pick up on Alonso.

"In China it was the 200th victory in a GP for Ferrari: I played only a small part in this great history, but I'm very proud to be a part of this legendary team. 200 wins show how strong Ferrari really is."