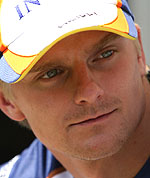 According to reports in the Finnish media, Heikki Kovalainen could be on the verge of being dropped by Renault in favour of Nelson Piquet Jr.

It is claimed that Kovalainen, who has not been as impressive as had been hoped this season, would move to Williams replacing Alexander Wurz. The move, which would take place before the British Grand Prix (possibly the French) would also see Williams receive $5m compensation from the French manufacturer.

The Finnish News Agency claims that Frank Williams has confirmed that Renault has approached him with an offer, while Piquet is already claiming that he will be driving the second Renault at Silverstone next month.

Ironically, both Wurz and Kovalainen scored their best results of the season in last weekend's Canadian GP, finishing third and fourth.