Anthony Hamilton to get winner's trophy? 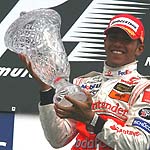 It is well known that all trophies won by McLaren drivers end up in the ever-expanding trophy room at the team's HQ.

However, following yesterday's Canadian Grand Prix, team boss Ron Dennis was asked if he might make an exception and allow Lewis Hamilton to keep the trophy.

"I don't know," he told German broadcaster Premiere. "In all honesty, I haven't thought about that yet."

Then, following a brief pause, which was clearly due to emotion rather than an attempt to stall for time, the Englishman added: "We may just give it to his dad, Anthony.