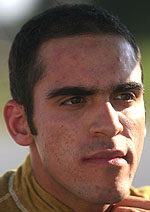 Pastor Maldonado (right) has taken his first GP2 Series pole position in today's qualifying session in Monaco. The Venezuelan set a blistering pace around the streets of the Principality to beat off the challenge of Giorgio Pantano and Andi Zuber.

As the track went green, Andy Soucek was the first driver on track as the majority of drivers left the pits to put in early banker laps. Soucek's 1:25.637 didn't stay at the top long, as championship leader Timo Glock showed his intentions early on with a 1:21.684 to sit top. His iSport team-mate Andi, however, toppled him from the top spot moments later with a 1:21.660 despite holding his car sideways all the way through Rascasse.

The yellow flags were out moments later as Kohei Hirate ran into the slip road at St. Devote and stalled. His Trident Racing team-mate however was having far better fortunes. Pastor stole the top lap from Andi with a 1:21.513, and as the cars started to bunch up, many decided to dive into the pits. So, with ten minutes gone, Pastor led from Andi, Timo and Giorgio, with the ART cars down the bottom of the pile on slow banker laps.

Pastor was soon back out again however, and the Venezuelan flew to an astounding 1:20.820 to increase his gap at the top. Meanwhile the ART boys were out in force, with Michael Ammermüller's stand-in Sebastien Buemi going second with Lucas di Grassi third. They were pushed down a position by Andi though, as he went P2 with another flyer. Vitaly Petrov took fifth spot and then spun into the barriers at St. Devote, crunching his rear wing but somehow making it back to the pits.

With ten minutes to go, Giorgio took second position from Andi and the remaining drivers awaited their chance to go for pole. When Luca Filippi left the tunnel however, white smoke erupted from the back of his Super Nova, and the resultant spillage from his car caused the session to be red flagged as the drivers slid around on the way down to Nouvelle Chicane.

After a long clean-up job, the cars were released again for the final seven minutes of the session. The top positions were set however, and when Jason Tahinci threw his FMS into the Swimming Pool barriers, it was game over for any pole challengers.

1st Pastor Maldonado - Trident Racing: I think we prepared for this race at the maximum, and I'm quite happy for everyone. We have to think about the strategy for the race, but now we have our first points, and we will see tomorrow.

2nd Giorgio Pantano - Campos Grand Prix: From the start of the year we've had a good car and we've just be a bit unlucky in the first few races. I hope that from here we start to go back and compete for the wins and championship.