Mansell and 'the peoples' circuit' 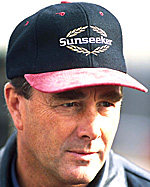 Nigel Mansell was back in the spotlight at the weekend, as he prepared for an FIA GT race at Silverstone.

The 1992 World Champion took the opportunity to share his thoughts on a variety of issues, including, as one might have guessed, the astonishing F1 debut of Lewis Hamilton.

With the Daily Telegraph's Sue Mott giving him free reign, Mansell was allowed to remind us once again - just in case we'd forgotten the previous ten-thousand times he'd mentioned it - that his rise through the ranks was "a lot harder".

The Englishman reminding us of the trials and tribulations of having to sell his house, the broken neck and the perceived conspiracy against him within the sport.

Taking time out to speak of something other than himself, Mansell, who scored some of his finest victories at the track - and make no mistake we simply adored him as a racer, we merely dreaded the moment he got out of the car and started whining - turned his attention to Silverstone, home of the British Grand Prix.

In a move which will surely delight his colleagues at the British Racing Drivers' Club (BRDC), Mansell claims that the best solution for Silverstone would be if Bernie Ecclestone would acquire it, thereby adding the track to his ever-growing game of Scalopoly, a cross between Scalextric and Monopoly, only one buys race tracks as opposed to houses.

"I'll say something very strange," said Mansell, clearly missing the irony. "I think it would be wonderful if Bernie Ecclestone ended up buying the whole thing and doing something very special at Silverstone.

"He is the only person who could afford to do that," he continued, before adding, in what some might see as a masterpiece of understatement; "It would cost a lot of money but Bernie is the godfather of motor sport.

"The power of Bernie and the influence of Bernie is absolute," added the Englishman. "His success has been instrumental to the sport. He's a great businessman. Silverstone have been their own biggest enemy by not investing in the infrastructure. It should be a shop window for motor sport worldwide."

Mansell, for reasons known only to himself, failed to make any mention of the bid in late 2004, which saw Brand Synergy Limited - of which the 1992 world champion was said to be a director - claim to have secured a long-term deal that would keep Silverstone and the British Grand Prix on the calendar.

Speaking at the time, director Kim Cockburn said: "We have agreed with Bernie Ecclestone to sign a seven-year F1 Grand Prix licence. We have sent our proposals to the BRDC. We share their vision to develop and deliver the masterplan that will make sure that Silverstone stays firmly on the map for the years to come."

The company, which had claimed to have £1bn available for its Silverstone project subsequently gave up on the idea and turned its attention to the Jaguar Racing Team.

If Mansell is still associated with Brand Synergy Limited, and if Ms Cockburn still has designs on Silverstone and a billion quid to spend, then why bother with Bernie... get in there 'our Nige', buy it and turn it into 'the peoples' circuit'.