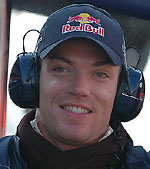 At the launch of the RB3 at Barcelona this morning, Robert Doornbos was confirmed as one of the team's two test drivers for 2007, the other being Michael Ammermuller.

The Dutch driver fulfilled a similar role in 2006, being promoted to a full race seat for the final three races following the sacking of Christian Klien.

"I'm happy and proud to be here," said Doornbos. "I had an awesome time within the Red Bull family last year and proved my worth in the three races I was given. Next to this I was able to witness the team's boundless ambition and determination to realise their objectives from a close distance. No wonder I wanted to be part of the team's plans again in 2007. If the car proves to be just as quick as it looks like, we can look forward to a great year!"