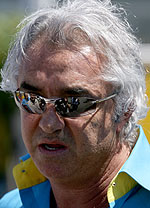 Renault boss Flavio Briatore may well find himself in hot water after launching a scathing attack on Ferrari's Felipe Massa, and suggesting, once again, that the FIA is biased in favour of the Italian team.

The Italian was incensed at an incident early in the final phase of qualifying when Fernando Alonso was unable to pass Massa. Briatore claims that the Brazilian was guilty of the same offence that was to cost Alonso a five-spot grid penalty at Monza last month.

"He is a kid, a little kid," he told reporters this afternoon. "Little in every sense.

"Felipe was in front of Fernando, braking and everything," he continued. "We will talk with Charlie (Whiting) about this. We will tell Charlie, but nothing will happen. We already know what the answer will be.

"Fernando on the radio was complaining. If you are fighting with McLaren it is fine, if you fight with these guys it is impossible."

Most worrying is Briatore's suggestion that nothing will happen, for similar comments at Monza almost saw the Italian charged with bringing the sport into disrepute, in what is seen by many as a long running row between him, his team and the FIA.

Massa dismissed the incident, claiming that it was of no importance: "It was the first lap," said the Brazilian, who went on to take pole, "he was behind me but then I pulled away. That's qualifying."

To check out our Suzuka qualifying gallery, click here