Ecclestone confident that GPMA peace is at hand 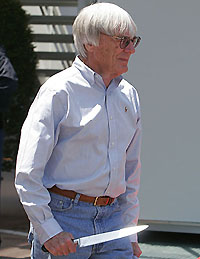 Although he has - thus far - stopped short of following British Prime Minister Neville Chamberlain's example and talking of "a peace in our time", F1 supremo, Bernie Ecclestone is confident that a deal will be reached with the manufacturers that comprise the Grand Prix Manufacturers' Association (GPMA) in days.

Speaking ahead of the 2006 season opener, Ecclestone said of recent discussions with the manufacturers; "I would be surprised if all the issues between us are not settled before the race in Bahrain.

"What we can agree on the technical side is dependent on how much money they want to save," he continued, according to The Telegraph, "but they will save a huge amount without adversely affecting the technical excellence of F1. It will remain the pinnacle of motor sport.

"We cannot continue to look as if this sport is a battle of the biggest budget," he added. "That way, at current spending, will ruin the sport and the companies. There is a point, probably long since past, when the cost of trying to win races and the championship outweighs the value of being successful. I think there is a mood of conciliation now. The teams will earn double what they got before."

Following Max Mosley's recent clear provocation of the manufacturers, Ecclestone is obviously opting for the 'good cop, bad cop' approach, and the GPMA's relative silence is evidence that it is clearly listening.

That said, money is not the only issue on the table, and at a time when Ecclestone and Mosley are clearly more concerned by the threat of a breakaway than they would ever have publicly admitted, it is to be hoped that the manufacturers continues to push for greater transparency and more say in the governance of the sport, rather than merely settling for more dosh.