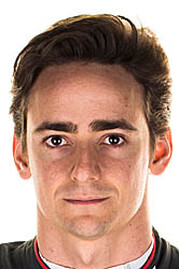 Between 2004 and 2006, Esteban enjoyed success in karting, mostly Rotax Max, winning the North Mexican Series in 2006 and finishing fourth overall in the Mexican Grand Nationals in Zacatecas that same year. He also won the Camkart Challenge Mexico, taking five wins from five races.

At the end of 2006 he tested a Formula Renault car and that was enough to convince him to make the move up to Formula BMW USA the following year. In that debut season he finished second overall (to Daniel Morad) taking four wins, nine poles and the 'rookie of the year' award.

As well as a test in the A1 GP car, 2007 also saw Esteban take part in two rounds of the Formula BMW Germany series and the Formula BMW World Final, in which he finished 25th.

In 2008, he dominated the Formula BMW Europe series, taking seven wins from sixteen races, while also finishing third in the Formula BMW World Final which was held in Mexico. The youngster even found time to take part in two rounds of the German F3 Championship (Oschersleben) and the Formula Master Series (Imola). At season end he also had a test for the Formula 3 Euroseries.

Unsurprisingly, he contested the 2009 Formula 3 Euroseries, with ART Grand Prix, while also dabbling in British F3 (four races) and finishing seventeenth in the Masters of Formula 3 at Zolder.

As part of his prize for winning the 2008 Formula BMW Europe series, in December 2009 he was given a test in the BMW-Sauber F1 car, even though the German manufacturer has already announced its decision to leave the sport.

For 2010, he chose to contest the inaugural GP3 Championship with ART Grand Prix, winning the series with two races to spare courtesy of pole position at Monza.

Clearly impressed with the youngster following his test in December 2009, in 2010 Esteban was put on the same training programme by Sauber as its F1 drivers, Pedro de la Rosa and Kamui Kobayashi.

In September 2010, having just won the GP3 Championship, Esteban was named as the Swiss team's test and reserve driver for 2011. In November he took part in the Young Driver Test in Abu Dhabi, finishing thirteenth overall.

Esteban moved up to the GP2 Series with ART for 2011, partnering Ferrari test and reserve driver Jules Bianchi, the pair also contesting the GP2 Asia series for the team.

Finishing eleventh in the Asia series, his best result being fourth in the Imola Sprint Race - both Bahrain rounds having been cancelled - in the main series he finished thirteenth, the highlight being a win in Valencia and a second in Hungary.

In November, he took part in the Young Driver Test in Abu Dhabi once again, finishing sixth quickest one day and again the next, ending the test seventh quickest overall.

Earlier in the season, Sauber confirmed that Esteban would continue his role as test and reserve driver in 2012, the youngster having been passed over - in favour of de la Rosa - when Sergio Perez withdrew from the Monaco event a few weeks earlier.

Wins at Valencia, Silverstone and Hungary, together with four further podium finishes, saw Esteban finish third in the GP2 Series, the youngster now with Lotus GP, previously known as ART, the French outfit run by Frederic Vasseur and Nicolas Todt.

Although he finished third in the title fight, he finished some way behind Davide Valsecchi and runner-up Luiz Razia, whilst under increasing pressure from Max Chilton and his Lotus GP teammate James Calado. Indeed, a number of nightmare weekends, such as Belgium, led many to describe his year as hit and miss.

At the Indian Grand Prix, in October, Esteban participated in the Friday free practice session, replacing Perez who had been taken unwell. The youngster recorded the 20th best time of the session.

In action for two days of the Young Driver Test in Abu Dhabi, Esteban posted the fourth best time overall, just 0.442s off the best time. A couple of weeks later, the youngster was named as Sauber's second driver for 2013, as the Swiss outfit opted for an all-new line-up which would include Nico Hulkenberg.

Looking far younger than his age, it was going to be interesting to see if Esteban was ready for F1, and Sauber had discovered another wunderkid, or whether he'd made the move up just a little too early. The feeling at Pitpass being that he should have remained in GP2 for one more year.

Like a number of its rivals, Sauber suffered from financial problems throughout 2013 indeed, at one stage some of the more excitable sections of the media were openly asking if the Swiss team would see out the season.

Maybe we should have seen the writing on the wall when the team reverted to a livery similar to that used in the 90s when it first entered F1, or maybe when Esteban crashed in qualifying in Melbourne and teammate Hulkenberg retired on his way to the grid. Whilst his teammate finished eighth in Malaysia, it was clear the C32 was nowhere near as competitive as its predecessor, a reality underlined by the fact that in the nine races between China and Belgium the team scored but three points.

Some woeful qualifying performances - his average position over the course of the season was 15th - meant he had it all to do on Sunday, while a stupid mistake in China which saw him miss his braking point and take out Adrian Sutil saw him pick up a 5-place grid penalty in Bahrain.

Spain marked a turning point. Having made it through to Q2 for only the second time, Esteban qualified 16th at a track where all the cars up to second (Hamilton) were covered by just a second. Before the race it was ruled he had impeded Kimi Raikkonen in qualifying and thus dropped 3 places on the grid to 19th. Nonetheless, he had a strong race and even led for a couple of laps. Impressing in a mid-race duel with Jenson Button, Esteban eventually finished eleventh, just outside the points, but had the satisfaction of posting the fastest lap, thereby entering the record books as the 'second youngest driver to set a fastest lap' after Nico Rosberg.

In Singapore both drivers were in the points, running 6th and 7th after pitting under the safety car, but as their tyres went away Esteban could only manage 12th.

Japan marked the team's first double points finish of the season, Esteban, having started fourteenth on the grid, made his way up the order and eventually finished seventh, holding off Nico Rosberg in the closing stages to take his first, and only, points of the season.

A week after Sauber announced that Adrian Sutil was to join the team for 2014, swapping places with Hulkenberg, the Swiss outfit confirmed that it was retaining the services of Esteban.

Whether the Swiss team was convinced by a Pitpass readers' poll which named the Mexican as 'rookie of the year', or his Mexican funding, was open to debate, but the youngster remained in F1 for another year. Like Sauber, we were expecting a major step forward.

Other than its financial situation, the team was hampered by the overweight, underperforming Ferrari power unit, a chassis that was never really balanced and a haphazard fly-by-wire braking system.

That Sauber, for the first time since it first entered F1, failed to score a single point tells you all you need to know about a wretched season for the team and its drivers.

Best result of the year was 12th in the season opener, though let's not forget Monaco, where he was running as high as eleventh, until he made a mistake and clouted the barriers at Rascasse. His long walk back to the pits, helmet still firmly in place, clear proof that he knew he'd blown it.

In fairness, in terms of reliability, only Caterham had a worse reliability record, the Sauber duo finishing 25 times from 38 starts (65.8%), and completing just 78.9% of the racing laps that comprised the season.

Unable to build on the promise shown in his rookie season, Esteban was bitterly disappointed not to be retained by Sauber - who quickly signed Marcus Ericsson and Felipe Nasr - or attract interest elsewhere, especially as his country made its much anticipated return to the calendar.

At a time when it was thought his only hope might lay with Caterham or Marussia, should they survive, from out of nowhere, Ferrari revealed the Mexican youngster had been recruited as test and reserve driver.

Barely had we recovered from that news than the Maranello outfit issued another statement, this time confirming a sponsorship agreement with the Mexican based America Movil group, a leading telecommunications company.

As the good doctor (Lawrence) always says; follow the money.

Scepticism aside, such a move could prove very useful for the (clearly) talented youngster.

Following months of speculation, over the course of the Mexican Grand Prix weekend, Esteban was finally confirmed as Romain Grosjean's teammate at the newly formed Haas team, which (surprise, surprise) enjoys a significant technical partnership with Ferrari, though all involved insist that the American outfit is not a B-team for the Scuderia.

We never like to kick a man when he's down - we really don't - but while Grosjean was driving his heart out - and we don't mean those opening two races - Esteban appeared to be Missing In Action.

Other than the fact that he didn't contribute a single point to the rookie outfit's tally, there were the incidents.

OK, he was innocent as far as Melbourne and Fernando Alonso was concerned, but two (count 'em, two) first lap collisions with Nico Hulkenberg.

Then there were the blue flag penalties - receiving two in one race - not to mention his move on Wehrlein in FP3 at Spa which resulted in a grid penalty.

In qualifying the Mexican didn't fare too badly in comparison with his teammate losing out just 9 - 12. Indeed, he was the first of the Haas pair to make it to Q3 (Italy). However, on Sundays he would regularly throw it all away with starts that would even embarrass Lewis Hamilton.

If one wanted to sum up Esteban's season then one need only look to the results - not the points, the results.

On no less than five occasions he finished 11th. And while he only qualified eleventh on two occasions, over the course of the entire season he spent 132 laps running in that very position, eleventh. Nearly man.

Fact is however, a 'nearly man' isn't want F1 teams want, especially those under pressure to make their mark. They want proven winners or out and out triers, and sadly Esteban isn't either.

Dropped by Haas is favour of Kevin Magnussen, Esteban's hopes for 2017 appeared to rest entirely on Sauber, though Pascal Wehrlein seemed to have that berth sewn up.

Indeed, days into the new year, Esteban announced his plan to contest the Mexico City round of the Formula E Series. Surely not what anyone, not least the 2008 Formula BMW Europe and 2010 GP3 champion envisaged.

Contesting three races in Formula E with Techeetah in 2016/2017, the Mexican subsequently contested seven races in IndyCar with Dale Coyne Racing in 2017.

In 2018, in addition to his simulator duties for Mercedes he also represented the team in a demonstration run as part of Silverstone's 70th anniversary celebrations.

In February 2019, at the unveiling of its 2019 contender, Mercedes confirmed that along with simulator duties, Esteban would be a development driver for the German team, which essentially meant sim work.

The Mexican continued in this role with Mercedes in 2019, however, it was another Esteban - a certain Mr Ocon - who joined the German team as its reserve driver.

With a return to the grid in 2020 ruled out, it appears that Esteban is doomed to continue as development driver, his F1 outings in 2019 limited to demonstration runs and an event celebrating Ayrton Senna ahead of the Brazilian Grand Prix.