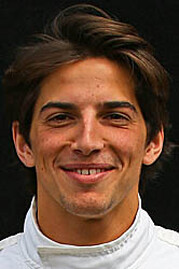 2006 also saw him try single-seaters for the first time, the youngster finishing third in the Formula Renault 2.0 Italy Winter series.

2009 saw him make the move to the Formula 3 Euro Series with Manor Motorsport. Finishing the season seventh, with four podiums, he subsequently moved to Mucke Motorsport for 2010, this time finishing fifth in the standings, again with four podiums, including his maiden win at Hockenheim.

For 2011, still in the Formula 3 Euro Series, he moved to Prema Powerteam, this time winning the title with twenty top-three finishes, including eleven wins. The Spaniard, the first from his country to win the Euro Series title, also won the FIA Formula 3 International Trophy.

For 2012 he made the surprise move to DTM, recruited to the newly revived Mercedes-Benz Junior Team which had previously guided the likes of Michael Schumacher and Heinz-Harald Frentzen.

As part of the Mercedes junior team, where he joined Robert Wickens and Christian Vietoris, Roberto was mentored by Schumacher, who by now was racing for the German manufacturer in F1.

It was a difficult, though educational, move for the youngster, who, failed to score a single point. Nonetheless, he remained in DTM for 2013 but switched from Persson Motorsport to the HWA Team. While the results were not as expected, he finished the season 15th overall, with one trip to the podium.

2014 saw Roberto return to single-seaters, driving for Zeta Corse in the Formula Renault 3.5 Series. A solid season, particularly in Moscow, the Nurburgring and Hungary, where he scored three wins in four races, saw him finish the year third overall.

2014 also saw him contest a couple of rounds of the Cooper Tires British Formula 3 International Series and the Macau Grand Prix, where he finished fourth, ending the year with a Stock Car race in Brazil.

The highlight of 2014 however, had to be his nomination as Caterham's test driver, the youngster driving in the Friday morning sessions at Monza, Suzuka and Sochi.

On 10 March, three days before the start of the season opening Australian Grand Prix, and having already agreed a deal to contest the Formula Renault 3.5 Series with Pons Racing, Roberto was named as Will Stevens teammate at Manor Marussia for the "opening rounds of the 2015 F1 season".

As it is, the team didn't even take part in the "opening round", unable to prepare for the race due to the lateness in securing its survival.

In fairness, Roberto was always going to be at a disadvantage to Stevens given the fact that the Spaniard is 10kg heavier. Let's not forget, this is a sport measured in thousandths of a second, and 10kg can mean a couple of seconds.

For the most part Roberto did a perfectly adequate job, given the fact that the car was a year old and money tight. That said, adequate isn't enough in F1.

Though initially a little overwhelmed by Stevens, the Spaniard began to close the gap, giving impressive particularly performances in Monaco and Belgium.

Twelfth in Britain was the team's best result of the year, and consequently saw Roberto finish higher than his two teammates in the final driver standings.

We say two teammates because Alexander Rossi took part in five of the seven races at the end of the season, the American clearly catching Stevens on the hop. Indeed, back in the car for the final race, Merhi appeared to have taken a step backwards, Abu Dhabi being a particularly bad weekend.

For the first part of the season Roberto continued his Renault 3.5 Series commitments, finishing second in Hungary. However, a ludicrous crash at the Red Bull Ring saw him excluded from the results and banned from the subsequent Sprint Race. At that point Roberto wisely opted to concentrate solely on F1.

As for 2016, whether Roberto has done enough - or has the resources - to impress Manor remains to be seen, but with a number of other drivers, including Pascal Wehrlein, linked with the seat, this appears unlikely.