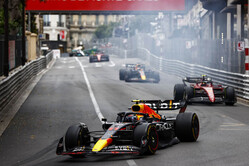 While admitting that F1 is not "totally off the table" for Hyundai, Cyril Abiteboul insists that for now rallying remains the priority.

When a former F1 team boss takes over as motorsport boss at one of the world's major car manufacturers, it is inevitable that some will inevitably suggest that this indicates possible interest in entering the sport... particularly when it comes days after the FIA called for Expressions of Interest.

However, former Renault boss, Cyril Abiteboul - for it is he - has played down speculation that the Korean giant is eyeing F1.

"Clearly, Hyundai is a company that is hot for a fantastic development at a global scale, with a new product line-up, a unique range and so on and so forth," said the Frenchman.

"Motorsport is here to support the business," he continued. "So I need to understand, with the rest of the company, what the business needs, and how we can support it right now.

"Rally has been the best solution in order to support small segment cars, segment A," he added. "We need also to see how segment A is going to move, moving ahead, and make sure that rally remains relevant to that.

"That certainly is the priority right now," he insisted. "We are getting ready. We must win and make sure that rally keeps on serving the interests of the business."

However, the Frenchman, though keen to play down speculation, admitted that the idea of entering the sport isn't completely "off the table".

"I don't want to say yes," he said, "because then you're going to elaborate that Hyundai is going to F1.

"If we need to do something else, in addition, we will see it in due course. But that's not the priority for now. The priority is winning in rally."

Thierry Neuville finished third in the opening round of the 2023 World Rally Championship, the Monte Carlo Rally, at the weekend, behind the Toyotas of Sebastien Ogier and Kalle Rovanpera.