The Colour of Monet 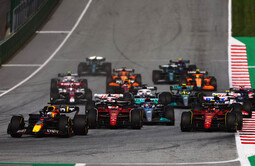 Claude Monet (1840 to 1926) is often viewed as the father of Impressionism. A truly beautiful art movement, style, concept, call it as you must, that like the romantics in music, when Beethoven dared to compose with passion about what he felt, chase concepts seen more with the soul than the senses.

Throughout his life Monet pushed the establishment of the time, before folding into a highly observed personal world which gifted us mere humans his "Water Lilies" series.

250 oil paintings over thirty years of the same scene, as far as Miss Physics was concerned, when it came to geo-reference points. Yet when it came to Claude's sight becoming increasingly impaired by cataracts each painting was altered not only by time of year, time of day and ambient light, but also by his failing visual sensors. His physical self could see less, so his soul had to see more.

Much as I admire - and follow as I can - the works of Adrian Newey, James Allison or, in the past, Gordon Murray, it is the spirit dance on the edge of death performed by the drivers which captures my heart, fires my soul, and excites me on race day. Sure, we can see, and measure, and compare lap times, yet it is those moments when the driver transcends the simulated, predicted performance of the car and produces a lap which has the team breathless while delighting us all, regardless of grid position initially secured or finishing place obtained.

So Red Bull, as detailed in reporting on this site, have transgressed the cost cap by a few handfuls of change, yet the other teams are still howling for several more pounds of flesh. Should we expect less from them in this post-truth age, where he who howls loudest and longest can claim bizarre social media victories?

Look at the reported facts, do not listen to those howling in the wind...

The Pitpass news article "Red Bull fined $7m for cost cap breach" captures the accounting drama in concise detail. A touch over 5.6 million pounds inaccurately reported, leading to, by the FIA's initial estimation 1.8m pounds, being a 1.6% overrun in over-spend.

Please dear reader, perform the flip with me... that means 98.4% of the Red Bull submission was spot-on... Think on that. 98.4% perfectly fine... when was the last time you got any task 98.4% correct, as verified by external judges dear reader?

The arch-bean counters at the FIA then broke-out the flux capacitor enabled abacus, and further corrected the Red Bull numbers, with a smug statement that if Red Bull had treated UK tax rules correctly, the actual overspend was about the same amount as the options list on a McLaren road car. To wit, 432,652 pounds Sterling, which at the time of typing equates to the cost of a takeout coffee over $376,000 US dollars. Or 0.37% over the cost cap...

So, flip with me again, we are now at 99.63% perfect compliance. What in your life is guaranteed within 0.4%? Any of you with a Swiss mechanical watch on your wrist will be misplacing more than 0.4% of the time of day every few hours as you speed recklessly about your imprecise life. Does it destroy you?

So I believe the fine can be judged as fair. It is far and above the cost overrun, and the 10% hammering of wind tunnel time is also a massive impairment for such a modest offence. Even when one has the Super-powered Adrian Newey on the books that is a big hit to testing and evaluation, and hence development activities.

Dear reader, for the tiny, and unintended error this was, Red Bull have been taken around the back of the bike sheds and given a sound beating with the old willow cricket bat. This will leave bruises that will hurt all through next year.

Will it let Haas win a Grand Prix next season? Will it enable Lewis to claim a stunning eighth title? Will it give us race winners across all the teams next season? I believe not.

Will it reduce the amount V. Max wins by next season? Possibly, we will never have the sliding-door chance to know by running an alternate reality next to the 2023 season.

Yet the cost cap was never designed to improve the racing. No dear reader, this is sleight of hand by the FIA and Liberty Media. The cost cap is all about making an F1 team franchise a money printing machine.

The Miami Dolphins are owned by Stephen Ross, who happened to be fined $1.5m last year for "tampering" with Quarterback Tom Brady while he was employed by the Buccaneers. The Dolphins have a 2022 valuation of $4.6bn. Yup, just one NFL team, and the franchise is worth 4.6 billion US dollars!

Back in 2009, Ross paid $1.1bn for the team. Since then it has generated massive annual revenue, with the figure being around $533m in 2022, leading to an operating profit around $160m. With a notional capital gain of $3.5bn plus half a billion a year in revenue it would appear to be a touch more profitable than the average lawn mowing, or pool cleaning franchise.

Let us now compare Stephen's $1.5m fine for clear cut cheating to these big numbers. It is a modest 0.03% of the franchise worth, or a fractionally larger 0.28% of revenue. Or a huge 0.94% of operating profit!

Or, compare the hit on our own road-going hip pockets. Based off the Australian average wage, a 4.83% fine would amount to $2,690 US dollars! So which is more likely to get you to slow down to a government approved (if pointless and annoying) posted speed limit? $16.70 US, the Miami (Vice) fine, or $2,690 US, the FIA fine? The cost of two coffees and a small biscuit, or the cost of an old functional second-hand car?

The FIA fine, plus testing restriction was fair and reasonable for the size of the error. As the FIA, and others, have noted; it was not cheating, it was an error of rule interpretation.

Now, back to the colour of Monet.

Liberty Media want to provide an entertainment product such that F1 franchises move toward that NFL model whereby each franchise is a Goose laying Golden Eggs faster than their Scrooge McDuck owners could ever spend them.

In 2020, Stephen Ross was worth - according to Forbes - around $7.6 billion US dollars. Which only placed the poor lamb 185th on their rich list. No wonder he is seeking additional income from F1. Divide that $7.6B by the average Aussie annual wage, and you get the number 136,445.

That is, it will take the average Australian 136,445 years, being approximately 1,772 average lifetimes, to earn as much as Stephen is worth. So if my ancestors in the middle Palaeolithic or the Eemian era roughly 136,000 years ago, had bothered to open a savings account and get the ball rolling I might by now, as an average human, have amassed the same wealth as Stephen.

So never, dearly devoted reader assume anything planned, enacted or delighted-in by the hyper-wealthy had anything at its core other than mighty self-interest. They are seeing with their visual receptors, not the soul of Monet.