FIA's hint at flexing floors of interest to shocked Mercedes 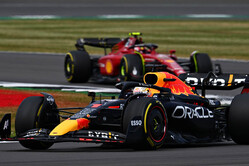 While the main focus of the revised technical directive was aimed at preventing 'bouncing', Mercedes boss, Toto Wolff was particularly interested in the suggestion that some team's floors are flexing more than is permitted.

The revised technical directive, which aims to have a metric in place by the time of the Fench Grand Prix later this month, also mentioned plank wear and flexing, which are considered to be part of the bouncing phenomenon, in that it is "inherently related to the same issues and goes hand-in-hand with the metric".

The FIA's feeling is that while the rules allow no deflection greater than 2mm at the leading edge of the plank and slightly further back, measurements are not taken where the driver sits, and as a result some teams are thought to have engineered the plank's mounting and skid block in such a way that it gives a degree of cushioning. The skids are thought to be flexing more than the allowed 2mm limit and as a result can be used more aggressively without wearing away.

"Nobody had an idea until the FIA brought it up in the last Technical Advisory Committee," admitted Toto Wolff, when asked by The Race. "Which was to a great surprise of all the teams because what's in the regulations, and what was the intent of the regulations, it's pretty clear.

"There is no argument why that could deflect more than what's in the regs," he added. "A bit of a surprise to say the least, more of a shocker."

"When it came to light, we realised there are opportunities that we've perhaps not been taking or exploiting," added head of trackside engineering, Andrew Shovlin. "So, it won't affect us in how we run our car. It may well be it affects our competitors and by virtue of that we move a little bit closer."

"Obviously it's a key performance factor," admits Christian Horner, "so you can understand why they're looking at it, but of the course the difficulty is - if a car runs wide at Copse, I'm sure the driver's backside is getting pretty warm with the amount of wood he's leaving on the aggressive kerbing there, so it's something that, as the regulators, that they are closely looking at, that there's no abusive of it but again it has to be subjective."

"Formula 1 cars have always been ride height sensitive," says Mercedes, Mike Elliott, "but these ones are designed that way. So if you can get the car lower there is performance to be found.

"As to whether it's been fair and equitable? Unfortunately, we don't get to measure everybody's car so I don't know what anybody else has got. And I think we have to just trust in the FIA that they do that job. That they've been around, that they're happy, that there isn't a massive difference.

"They're obviously unhappy enough to introduce a rule that changes that. And we'll need to see what happens in Ricard as a result of that. As to whether there has been a significant advantage or not, I can't really answer the question any more than that."