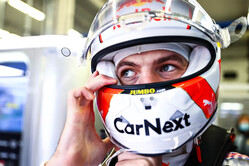 Ahead of a weekend which could see the drivers' title settled in his favour, Christian Horner believes that Max Verstappen is driving "better than ever".

The Briton's comment comes at a time Lewis Hamilton, courtesy of back-to-back wins in Brazil and Qatar, has closed the gap to just 8 points, and with many believing the fast Jeddah track will suit his 'rocket' engine.

Only one of the titles can be settled this weekend, but not both.

On the other hand, should Mercedes outscore Red Bull by 39 points this weekend - as they did at Silverstone - the German team claims its eighth title.

"Fighting for your first F1 title is an intense moment in your racing career," admits Christian Horner, "but the maturity Max has shown throughout the campaign has been extremely impressive.

"He's relaxed and dealing with the pressure incredibly well, I think he is driving better than ever," adds the Briton.

"A good example of this was during the race in Qatar, when he did not feel we could catch Lewis, but commented over the that radio he 'wanted to have some fun'. Max is plain-speaking and he calls it how he sees it. He doesn't work with a sports psychologist, it is just how he copes with it.

"We head to Saudi Arabia for their first race where the track looks insane from I've seen," said Horner. "It's hugely fast and the first sector is like Suzuka, but with walls!

"It is going to be a massive challenge and I'm sure there will be plenty of excitement and drama.

"On paper, it looks like a power-sensitive circuit, so you'd say that tends to favour Mercedes and it looks as though they feel that way too, but you just don't know."

Looking at the season thus far, Horner admits: "Fighting for two world championships is exactly what we've worked hard for. In previous years we'd have bitten your arm off to be in this position at this point in the championship.

"We want to be up at the top fighting for titles and while it has been an intense year, the pressure is something we put on ourselves. With the benefit of experience, we only worry about the things we can control, rather than the things we can't, especially while the stakes are high.

"I have really enjoyed this championship and the fact we've been able to take the fight to Mercedes and Lewis, it's been a phenomenal season to date. Some people thrive under pressure and some people shy away from it, but I've always felt I performed at my best under pressure and that doesn't feel any different to any other campaign.

"Off circuit there has been a bit more distraction, but when the green light comes on, everything else is insignificant."