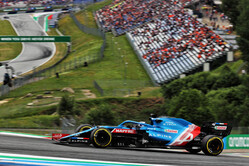 Zhou took over Fernando Alonso's A521 for Free Practice 1 at Spielberg for his first taste of an official Formula 1 Grand Prix race weekend session. Zhou ran a smooth programme, using the prototype test tyres and Mediums (C4) across his 29 laps. He ended the session in fourteenth place.

During FP1, Esteban Ocon tasted Pirelli's prototype tyres - designed with a more reliable construction, ready for use from this month's British Grand Prix - as well as the Mediums and Softs (C5). He finished the session in eleventh place.

Fernando was back in the car for Free Practice 2, beginning his afternoon on the prototype compound. Conditions were significantly cooler in comparison to last weekend's Stryian Grand Prix with lap-times much faster. Both drivers attempted low fuel runs on the Softs before completing the day on high fuel on the same compound.

Esteban Ocon: "It's been a very busy day with lots of different tests completed. We had the prototype tyre to test out and that was interesting. We also ran the C5s, Softs, which is different to what we had last weekend with the C4. We did some valuable runs on those on both low and high fuel. The conditions were also a lot different to last weekend, much cooler, so the lap-times were a little quicker. The long runs were in line with what we expected too, and there's more work required tonight to analyse that. All in all, a busy, but productive day."

Fernando Alonso: "It was good to be back in the car this afternoon especially with the C5 tyre compound, that we didn't have last weekend. It was good to try some laps on them on both short runs and long runs. I think that we still need to do some work to fine tune the set-up of the car; with this tyre compound, maybe, we have a different balance. It was quite a smooth FP2 for us and there's more to come tomorrow hopefully."

Guanyu Zhou: "It felt special to drive FP1 today. I'm really happy with all my runs and I was able to get familiar with the tyres early on. I didn't expect to be up to speed so quickly and the pace was definitely there on the Mediums. I felt good this morning, and I was getting more confident on each lap. I just wanted to build it up steadily and grow into the session. I'd like to thank the team for the opportunity, it was certainly very special. Hopefully I made everyone proud and there will be more moments like this later in my career."

Davide Brivio, Racing Director: "We've had a productive day and it's been a different Friday to usual. Firstly, we had Zhou in the car this morning. He did a very good job, didn't make any mistakes and put in some competitive lap-times. He can be pleased with his performance and work, and we're very happy for him. We also tested the prototype tyre in both sessions in preparation for the next race, which was good. An important part of today was learning as much as possible on the C5 compound. The tyres are a step softer this weekend and we have the information now to analyse. We'll work through everything tonight to see what choices we can make for the rest of the weekend."