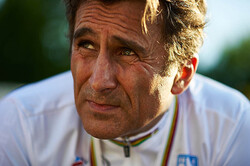 The Italian, who remains in hospital in Padua following the accident in June, initially underwent four operations at the Santa Maria all Scotte hospital in Sienna before being transferred. He is currently being treated in the neurosurgical department of the Padua University Hospital, where, according to Corriere della Sera, his condition is improving.

Initially in an induced coma, Zanardi underwent extensive surgery to rebuild his face and skull following the hand-bike accident during a stage of the Paralympic hand-bike 'Obiettivo Tricolore' relay race. The former F1 driver and two-time Champ Car champion is understood to have lost control of the hand-bike, overturns and crossed into the path of an oncoming truck.

After showing signs of improvement he was transferred to the Villa Beretta rehabilitation facility near Lecco, at which point he was brought out of the coma.

However, his condition began to deteriorate shortly after and he was transferred to the intensive care unit of the San Raffaele Hospital near Milan where he underwent further surgery for "late complications due to the primal head injury".

According to Corriere della Sera, Zanardi is now able to shake hands on demand and raise his thumb in response to questions. Doctors say he also able to recognise his wife Daniela.

Though he remains unable to talk - due to a hole in his trachea which doctors are keeping open as a precautions he has recovered his sight and hearing.

The doctors are said to be confident that Zanardi will regain the majority of his brain functions.