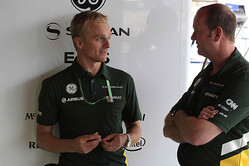 Since the results of the algorithm-based analysis were revealed earlier this week there has been widespread criticism of the standings, especially in terms of the inclusion of drivers such as Jarno Trulli and Heikki Kovalainen.

While fans and pundits had no problem accepting Ayrton Senna as the fastest driver over a single lap, with Michael Schumacher and Lewis Hamilton close behind, other than the inclusion of Trulli and Kovalainen, many feel that the results are somewhat similar to those TV shows that rate the best songs, bands, movies and TV programmes ever, yet which only ever seem to focus on the most recent examples.

While the available data goes back to 1983, many wonder why drivers such as Juan Pablo Montoya and Mika Hakkinen are missing while Nico Rosberg and Charles Leclerc are both in the top seven.

"What we set out to do here was just to try and identify who we thought was the fastest driver," explained Ross Brawn, "a driver who has demonstrated his speed over one lap and not necessarily his racing prowess or his results.

"There's been one or two surprises," he continued, a masterpiece of understatement, "but when you delve into it, there's a certain amount of sense.

"Someone who worked with Jarno, who I know very well, said that if Grands Prix were five laps long, he'd win every race because his speed was phenomenal over a very short period," said the Briton.

"He was incredibly quick," added Rob Smedley, who worked with AWS on the data and also worked with Trulli at Jordan. "But not great on a Sunday.

Revealing that he has been contacted by a number of drivers, who, like fans and pundits, read the results with varying degrees of disbelief, he admitted: "I'm popular in a few places but predominantly unpopular at the minute with most of the people on the grid.".

"We've extrapolated this and we're quite proud of it," insisted Brawn, "and I think it stands scrutiny and it's controversial and we will get lots of debate around it and maybe we will refine it.

"I don't think people are laughing at it. I think it's caused plenty of debate. I think once you understand the methodology then people will start to understand."