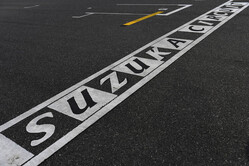 As was the case in 2018, there is just one DRS zone, and it is located on the main straight with the detection point 50m before Turn 16 and the activation point 100m before the control line.

To cope with the incredible loads demanded of some of the most memorable corners on the F1 calendar, Pirelli has nominated the hardest combination of tyres in its range: C1 as the hard, C2 as the medium, and C3 as the soft.

The compounds nominated this year are a step harder than the medium, soft and supersoft tyres that were chosen last year, which should enable drivers to push to the maximum during every stint, rather than resort to pace management to make a one-stopper work.

Lateral demands are the defining characteristic of the circuit (rather than longitudinal forces) thanks to long and fast corners such as 130R and Spoon. There is a distinct flow to the track that is all about carrying momentum: the braking demands, for example, are relatively low.

The asphalt at Suzuka is among the roughest and most abrasive of the year, which increases tyre wear and degradation.

Last year's race was won by Lewis Hamilton with one stop, going from softs to mediums, the same strategy was adopted by his team mate, Valtteri Bottas in second, while third-placed Max Verstappen went from supersoft to soft.

Suzuka is well-known for its variable weather, with Typhoon Hagibis scheduled to make an appearance on Saturday. Overnight rain often has the effect of 're-setting' the track by washing away any rubber laid down: last year quite a lot of track evolution was noted.

"Japan is always one of the most exciting and unpredictable races of the year," says Mario Isola, "with Suzuka being an old-school track that rewards bravery and commitment.

"Because of the considerable cornering demands that it places on tyres, we have selected the hardest possible combination in our range, which should help drivers push to the maximum even with a one-stop strategy. This is what the teams nearly always aim for, and most drivers chose at Suzuka last year.

"In 2017 we also saw a new overall lap record in qualifying, and with the emphasis on cornering speeds on the current generation of cars, it will be interesting to see if that is broken this weekend.

"Suzuka is also well-known for its variable weather, so it wouldn't be surprising to see the wet weather tyres appear on this famously demanding circuit."

Suzuka is one of the toughest circuits of the year for the ICE. The sustained bursts of throttle test the internals' strength, while the heavy braking events challenge reactivity and reliability.

Over 65% of the lap is taken at full throttle, but the majority of this comes in the second half of the track from the exit of the Spoon corner (Turn 14) to the chicane on the entry of the pit straight. This includes a pass through the 130R, which is taken at over 186 mph (300 km/h) despite being a flowing left hand bend.

With a top speed peaking at almost 205 mph (330 km/h), Suzuka gives rise to one of the highest speeds seen in the second part of the year. Inside the ICE the pistons will turn at an incredible 200 times per second, generating enormous internal forces.

The second slowest corner is the chicane, which is taken at approximately 50 mph (80 km/h). This is the best chance to recover energy through the MGU-K as the cars approach at well over 192 mph (310 km/h). Braking down to under 62 mph (100 km/h) generates huge amounts of heat and energy in the brakes. At this point there is even excess energy that engineers are not allowed to recover as a result of the regulations.

Indeed, the Briton heads into the weekend as 28/17 favourite, with the likes of 1xbet tipping Valtteri Bottas and Charles Leclerc ahead of Sebastian Vettel and Max Verstappen. You can create an account with this bookmaker and use the 1xbet bonus review by Sportytrader which covers the offers available.

Hamilton shares with Fernando Alonso the distinction of having won at both Fuji and Suzuka. The Spaniard won at Suzuka in 2006 and Fuji in 2008. On both occasions, he was driving for Renault.

McLaren is the most successful team at the Japanese Grand Prix with nine wins. Two of McLaren's victories (1977 and 2007), however were taken at Fuji. At Suzuka, they are tied with Ferrari on seven victories each.

Alongside Hamilton, Kimi Raikkonen and Sebastian Vettel are the only other Japanese Grand Prix winners in the current field. The Finn won in 2005 for McLaren. Vettel won in 2009, 2010, 2012 and 2013 for Red Bull.

The race winner has started on pole at Suzuka 15 times, with roughly two-thirds of Suzuka races since the turn of the century being won from pole - including the last three races.

Only four races at Suzuka have been won from behind the front row. Alonso (2006) won from P5, Alessandro Nannini (1989) and Nelson Piquet (1990) won from sixth
position and Raikkonen (2005) holds the record for victory from furthest back on the grid, winning from P17.

George Russell, Antonio Giovinazzi, Alex Albon and Lando Norris all make their competitive Suzuka debut this weekend. Of the four, only Norris has prior experience of the circuit, having driven in FP1 last year. He completed 30 laps for McLaren, substituting for Stoffel Vandoorne.