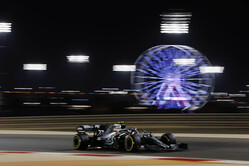 Though Lewis Hamilton was always going to bounce back following the shock of Melbourne, a less than inspire performance from Valtteri Bottas in Bahrain, suggested that the Version 2.0 witnessed in Australia might have been a one race wonder.

Though the Finn was close to his teammate's pace in qualifying, following a strong start to the subsequent Grand Prix which saw him up to second behind leader Vettel, he soon began to fade as he appeared to struggle for grip.

Taking second, courtesy of Leclerc's engine issue, Bottas had dropped 30.983s behind his teammate at that point, suggesting that he either had a problem or Version 1.0 - that seen for much of 2018 - was back.

Not so, says the Finn.

"I think the wind caught me up a bit, I braked a bit too late into Turn 1, trying to keep my position, and I lost two places," said the Finn of the moment at the end of the first lap he lost the advantage gained at the start.

"Ferrari, ultimately, was very, very strong again," he continued. "During the times with the wind I ended up doing some mistakes, like I think some other drivers did as well. It was extremely difficult to keep the rhythm.

"I managed to save the engine at some point when there was no threat from behind and a big gap in front," he added. "Also, I had a plastic bag stuck on my front wing at some point, which was costing performance, so not the perfect race.

"It was a bit out of reach with the strong pace of Ferrari, they got it, but while there is this opportunity it's going to be important," he insisted. "Even though it felt a super-difficult race, I'm happy to be getting this amount of points, because in the end, consistency is going to be the key."