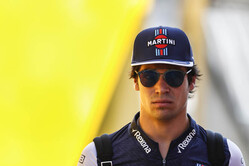 The final flyaway races of the season continue with Sergey's home race, the Russian Grand Prix, next up on the calendar. Sochi sets the scene for round 16 after a sweaty race around the streets of Singapore last time out. Both Lance and Sergey brought the cars home in a race of high attrition with reliability proving one of the FW41's stronger suits. Sergey's come close to a podium finish in Formula 2 at the Sochi Autodrom, meanwhile Lance just missed out on the points last year. We look forward to seeing what this year's race brings...

For Russia, Pirelli has made available the soft, ultrasoft and hypersoft tyres.

Paddy Lowe, Chief Technical Officer: This weekend we head to the Sochi Autodrom on the Black Sea for the fifth time, and for the first of a back-to-back flyaway ending in Japan. The weekend will be very special for us as a team, as it will be Sergey's first home Formula One race, so we expect to see huge support for him from the local fans. We head to Russia later in the season than usual, but we expect to see similar weather conditions. The circuit itself is part permanent road, part street circuit and can be quite technically challenging. It requires good all-round performance to manage both low and high-speed corners, and there is also a very long run down to turn two, the first limiting corner, and one of the longest standing starts of the season. The circuit is wide though with low kerbs which allows the drivers to attack the corners. We look forward to continuing the fighting spirit we saw in Singapore, in these final few events.

Lance Stroll: It is pretty cool to compete in the Olympic village. It definitely feels like we are in Russia and it is very beautiful scenery with the mountains, snow and sea. What they have done to the place with the infrastructure is incredible and they have done a top job. The track is great and enjoyable to drive. Last year in qualifying I nearly got to Q3, but I didn't get to do the warm-up lap I wanted, and around there it is quite important to get the tyre working properly. I am sure it will be a great weekend for the team, especially as this will be Sergey's first home race.

Sergey Sirotkin: My home race is always good, but as with anything in life, there are ups and downs. It's obviously a big pleasure to race in front of my home crowd. I get a lot of support from all over the country, but at the same time it will be a very busy weekend for me. There will be a lot of work to do, much more than compared with other weekends, so it's going to be very intense. It won't be easy to manage my time and energy, whilst still being able to perform at my best. That said, it's still a weekend I'm looking forward to, but I know it's going to be tough!