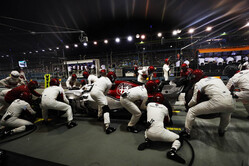 The spectacular Formula One night race in Singapore has come to an end, with Charles Leclerc having scored two more points for the Alfa Romeo Sauber F1 Team. Marcus Ericsson was also close to a top-ten finish, with a consistent performance having him reach the chequered flag in P11. Starting from P13 and P14, both drivers made a good start and gave a strong performance, each fighting their way to the upper midfield on a one-stop strategy, challenged by high temperatures and the hurdles posed by the demanding Marina Bay Street Circuit.

With confidence and motivation high, the team is heading back to the Switzerland headquarters to prepare for the next Grand Prix weekend in Russia.

Marcus Ericsson: "It was a pretty good race today. The pace was good and there were no mistakes made. Despite that, it is a bit frustrating to have finished in P11, so close to the points. We gave a strong performance, but could not fight for P10 anymore after coming back out onto the track behind the leading cars following our pitstop. Nevertheless, we did a good job as a team and will fight back in Sochi."

Charles Leclerc: "What a race - it was quite close to being perfect. We had strong lap times, and the balance of the car felt good from the beginning to the end. We made a great recovery this weekend, after having a weaker race pace on Friday. With our strategy, we were able to fight our way to the front of the midfield and finish in the points again. Achieving this after the past few weekends feels good and shows our potential. I look forward to the next one."

Frederic Vasseur, Team Principal: "We are satisfied with our result today. After a tricky start to the weekend, we recovered well and qualified in decent positions. Our strategy was good and both drivers gave a strong and consistent performance in a very demanding race. Charles finished in P9 adding two more points to our tally, and Marcus was also close to finishing in the top ten. We have to stay focussed and continue improving this way, and I look forward to the next Grand Prix in Russia."