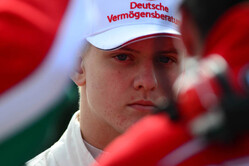 In the wake of his recent form in F3, winning all three rounds last week at the Nurburgring and thereby going second in the championship, suddenly there is talk of Mick Schumacher, son of the legendary seven-time world champion, moving up to F1, especially as winning the European F3 title would see him qualify for the requisite superlicence.

While his management has always been keen to play things down - the youngster beginning his karting career using his mother's maiden name - the fact is that he is now attracting attention in his own right.

Linked with a possible move to Toro Rosso, a suggestion dismissed by the team, it is clear that F1 team bosses are noticing the youngster.

"I think there is quite a hype about Mick Schumacher and he's doing very well at the moment in Formula Three," said Guenther Steiner.

"We haven't looked at it," he admitted, when asked if he was a name Haas might consider. We, at the moment, as a young team, we prefer to go with drivers with experience, but I think there is a future for Mick Schumacher in Formula One so let's see what he's doing in the next years and what his plans are. Maybe he doesn't want to go straight to Formula One."

"So far I don't know if Mick has the 40 points for the super licence," said Sauber boss Fred Vasseur, "but honestly, I think there is a huge step between F3 and F1 and with the small number of test days we have during the winter, I think it's... I don't want to say impossible because we will see, but it's quite difficult to do the step and it will make sense probably for him to do Formula 2 or something like this. But he could have a link with a Formula One team, he could do some FP1... There are many ways to prepare for F1."

"The most important thing is to let him grow without giving pressure," said Maurizio Arrivabene, with whose team Michael Schumacher won five of his titles. "The recent results were very, very good and I wish to him a great career.

"With a name like this, that wrote the historical pages of the Ferrari history, I think the door at Maranello is always open of course, but without burning the step, that is, a Schumacher family decision but let the guys have fun.

"I always repeat this, being focused, concentrated but at the same time have fun and to grow up slowly but certainly. Then we will see about the future. How can you say no, in Maranello, to a name like this?"