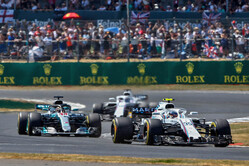 While the characteristics of the Hungaroring made Daniel Ricciardo's work that much harder as he attempted to slice his way through the field on Sunday after qualifying 12th, the same cannot really be said of Silverstone or Hockenheim.

While not wishing to take anything away from Lewis Hamilton's rise through the field from 14th in Germany, or Ricciardo's rise from 15th to 6th before suffering an engine failure, it's fair to say that as they picked their way through the field their slower rivals offered little opposition. Indeed, but for the usual dirty air factor and that the midfield runners were fighting one another for track position, Hamilton and Ricciardo's progress might have been even more rapid.

Asked if it has become too easy for out-of-position drivers to work their way through the field, some of those midfield runners were in no doubt.

"At the moment, yeah, it's really easy for them because we can't fight," says Esteban Ocon, "we would destroy our tyres and it's useless to do that because we are not competing in the same league to be honest.

"I see it from that angle, that it's not my race so I have to let them go and fight for mine," he added. "But we'll see in the future. I'm sure Formula One wants to have more equal cars between teams and I think that would be a good thing for the show, definitely."

"It's not realistic when you see all these cars flashing by because we are not fighting them," adds Carlos Sainz. "I'm sorry to say that because it's not good for the show but we are just not able to fight them, it's two completely different categories, it's up to two seconds, two seconds and a half sometimes in race pace.

"There's bigger spaces between other categories sometimes and they are called different. It's like that, but I really have a lot of trust in Liberty Media, the FIA that they're going to push hard to overcome these deficits and make the thing a bit more close because if not, it's just a top six race and then the rest, as we all know."

When Valtteri Bottas is asked if it is as easy as Ocon and Sainz have suggested, before the Finn can open his mouth, the other two nod and snarl: "Yeh!"

"It really depends on the track, of course," says Bottas, "but on tracks where there are overtaking opportunities, big DRS zones when you have the edge of more than 1.5s, two seconds in the race taking places, yeah, then of course you are always trying to do it quick but it's kind of a matter of time.

"Like Carlos and Esteban said, I've been in the same situation many, many times before and you're always doing your own race as a team, as a driver, so you always need to calculate the risk on how much you're willing to risk your race for one position because you can lose five places if you destroy your tyres or something like this."