The latest thoughts of Zak Brown 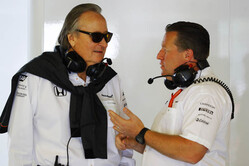 Days after suggesting that F1 needs to further expand in Asia, suggesting that China deserves a second race - despite its repeated failure in selling out its existing event - Zak Brown is calling on teams to make short-term sacrifices in order that F1 may flourish under its new ownership.

"We need to do what is right for the sport," Brown told Motorsport.com. "That is Chase Carey's job, and it is not going to be easy, but McLaren are prepared to make some sacrifices for the good of the sport.

"Ultimately, what is for the good for the sport will come back and be better for us all," he added. "So, we are prepared to make some short-term sacrifices, because we think it will be better for the long term, so it doesn't feel like a sacrifice.

"This is a time where I think we all need to work together to grow the sport," he insists. "We are taking a 10-year plus view, not the next couple of years. We should have up to six teams capable of winning races, because that is what the fans want."

Brown's comment comes at a time when McLaren, having effectively shunted out Ron Dennis, is preparing to take a seat on F1's board alongside Mercedes and Ferrari, giving the Woking team a say in the sport that its rivals can only dream of.

As for sacrifices, the continued bad form of the Woking team, which is already struggling for sponsors - finding said sponsors being the job with which Brown was originally charged - is going to take a financial hit in terms of prize money, while Liberty is already seeking to axe its historic bonus in 2020 when the Concorde Agreement comes to an end.

Consequently, said sacrifice might not impact McLaren quite as much as Brown would have us believe.

"The new F1, the next era, is all about the fan," he insists. "We know the fans want to follow the sport, they want great entertainment and they love the technology. And it needs to be in that sequence, not technology first."

Again, Brown is being somewhat disingenuous, as F1 TV coverage slowly but surely disappears behind a paywall, any extras the sport provides to enrich the fans enjoyment will not be done for altruistic reasons, rather parting said fan from their money.

As McLaren, a 14 time winner of the British Grand Prix, heads to its home race tenth in the standings, one cannot help but feel that the Woking outfit would be best served by its Executive Director concentrating on the immediate future of his team rather than the long term future of a sport which, seemingly, already has a more than capable team at the helm.