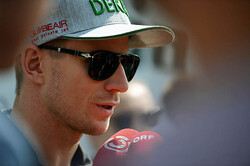 Former Renault team boss Frederic Vasseur has admitted that Nico Hulkenberg found it difficult to accept his departure from the French team earlier this week.

Vasseur, who worked with Hulkenberg at ART Grand Prix with whom the German won the 2008 Formula 3 Euro Series and 2009 GP2 titles, quit the French F1 team citing differences of opinion with the numerous other 'chiefs' within the Enstone-based outfit.

With Vasseur and Hulkenberg enjoying a close relationship that goes back many years, the Frenchman, who had previously guided Lewis Hamilton and Nico Rosberg to the GP2 crown, admitted that the German played heavily on his mind when deciding whether to remain or leave.

"That became a major hurdle when I made the decision to leave Renault," he told French TV's 19h30 Sport. "I am close to Nico and I put a lot of effort in to getting him to drive for Renault.

"Nico and I talked a lot about my decision and he's been very supportive," he continued. "The decision was hard for him to accept, but he is fully involved and he will give his best.

"I think my decision to leave the team was best because it was not working, it was clear."

The move to Renault sees Hulkenberg at his third team since entering F1 in 2010 with Williams. And while the talented German has yet to score a podium finish, Vasseur is convinced the youngster is a potential champion.

"I think he's one of the most talented drivers I've seen in the junior series for the past ten years," he said. "Only three drivers captured the GP2 series' title in their rookie season, Lewis Hamilton, Nico Rosberg and Nico Hulkenberg. I think Nico is one of the few drivers who can win the world championship."