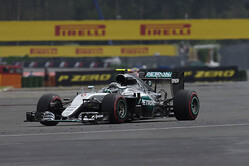 The teams concentrated on the P Zero Red supersoft and P Zero Yellow soft compounds in Germany, with very little FP1 running on the medium tyre, which has also been nominated for the return to Hockenheim this weekend.

With around 1.5 seconds now separating these two compounds, the supersoft seems set to be the tyre that the frontrunners will qualify on tomorrow. This gap actually increased from the 1.3 seconds seen during FP1, probably because of the teams optimising their performance on the supersoft in the afternoon, as they concentrated on qualifying and race simulations.

These were two particularly important free practice sessions, as Hockenheim has not been on the Formula 1 calendar for two years, meaning that the teams had to rebuild their data based on the much more powerful current generation of cars. In the morning, the track proved to be slippery and some drivers experienced initial graining - but the majority of competitors still largely beat the equivalent times from the last Hockenheim FP1 session in 2014 and the best FP1 time was already more than a second faster than 2014 pole. A particularly significant result as this happened relying on exactly the same compounds (soft and supersoft) as those used two years ago: a new situation this year, as in the previous GPs we presented a softest choice than one year ago.

This trend continued in FP2, with the top six drivers actually faster than the 2014 pole time. Just as was the case in FP1, Nico Rosberg led home his Mercedes team mate Lewis Hamilton. Track temperatures did not exceed 40 degrees centigrade during FP2, but the changeable weather that characterises Hockenheim is expected to remain during the rest of the weekend - so we can expect an unpredictable race.

Paul Hembery: "With the drivers not having been to Hockenheim for a couple of years, today was really all about reacquainting themselves with the track and collecting data that was relevant to the current performance levels of the 2016 cars and tyres. Despite some changeable and slippery conditions - especially in the morning - the teams generally achieved their objectives and we've got a lot of data to look at now. It's clear that the supersoft enjoys quite a notable performance advantage here, so naturally the teams have concentrated a lot on that, as well as maximising the opportunities offered by the soft tyres. However, there's still quite a lot of learning and analysis still to be done."