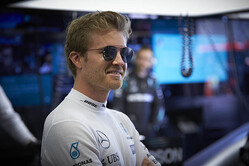 Ahead of today's second practice session the air temperature is 25 degrees C, whilst the track temperature is 38 degrees. It remains bright and sunny however, there are dark clouds in the distance which supports UBIMET's forecast of rain during this session.

Nico Rosberg was quickest in this morning's session, topping a timesheet that had more than a hint of Noah's Ark about it.

Behind the two Mercedes (natch!), came the Ferraris, Red Bulls, McLarens, Toro Rossos... and Ericsson. Followed by the Williams and force Indias.

Other than the sheers pace of the Silver Arrows - Rosberg was 0.326s quicker than his teammate and 1.150s quicker than third placed Sebastian Vettel - was the amount of cars that ran wide, particularly in T1.

As in Austria, Britain and Hungary, the FIA is seriously coming down on those who exceed the track limits, whilst performing U-turns on just about every other issue.

With Charles Leclerc and Esteban Ocon on duty earlier, this afternoon sees Esteban Gutierrez and Jolyon palmer get their first running of the weekend.

With a serious threat of rain, we are likely to see the drivers keen to get to work from the outset.

The lights go green and Haryanto leads Nasr on to the circuit. The Haas duo perform practice starts.

Soon there are 8 drivers on track, including the two who missed this morning's session and the Ferrari duo. All are on softs.

As Grosjean looks to be seeking out the old circuit, albeit heading in the wrong direction, at T6, Hulkenberg goes quickest (18.363).

Charlie Whiting confirms that "any driver who is judged to have left the track three times at Turn 1 will be reported to the stewards". This should be fun, especially as every single driver went off several times at T1, Verstappen no less than 14 times.

"Help me with the brake balance as I don't know what to do," says Grosjean following a spin at T6. "It's not working." The Frenchman had a difficult morning, then again he had a difficult Hungary...

A 17.978 sees Verstappen go quickest, only to be leapfrogged by teammate Ricciardo (17.716) moments later.

Rosberg posts 18.324 to go third as Hamilton looks to improve on 34.581. Next time around the Briton fails to improve, having gone off at T1.

Vettel complains that his steering wheel is not straight.

Just 15 minutes into the session and Verstappen has been off at T1 twice, once more and he's reported to the stewards. Hamilton is warned by his team that he too is close to being reported.

Vettel complains that due to various issues including traffic and balance, he has not had a decent lap.

Heading back to the pits, Hamilton leaves it very late and has to cut across the white line at the pit entry.

Twenty-five minutes in and Haryanto and Hulkenberg make the switch to supersofts. Perez also.

Hulkenberg goes quickest in S1, despite an off in T1, going on to maintain the pace in S2. At the line the German posts 16.781 to go quickest.

As more and more drivers make the switch to supers, Button posts 17.087 to go fourth. The Briton subsequently reporting that his cockpit is getting "quite warm".

After a cool down lap, Raikkonen goes quickest again in S1 before losing pace in S2.

Now Rosberg goes quickest in S1, as Ricciardo goes quickest overall with a 16.490. However, moments later Rosberg bangs in a 15.614 to go top by a whopping 0.8s.