Mallya: All we want is a more level playing field 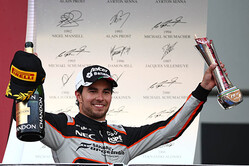 Like Sauber, Force India has made no secret of its unhappiness at certain aspects of the way Formula One is run, in terms of the decision making relating to the rules and also the division of prize money.

Indeed, in September last year the two teams lodged a complaint with the European Union, "questioning the governance of Formula 1 and showing that the system of dividing revenues and determining how Formula 1's rules are set is both unfair and unlawful," admitted the Silverstone-based outfit at the time.

Whilst welcoming the investigation, Bernie Ecclestone recently revealed that he is looking to scrap the controversial bonus payments to teams and adopt a system similar to the Premier League, where all twenty teams receive an equal share of the revenue from TV coverage as well as prize money.

Such a move would be most welcome, admits Force India boss Vijay Mallya.

"This sport, thanks to Bernie Ecclestone, generates a huge amount of money. The commercial rights holder makes a huge profit. Deals have been done with the big teams that sees them get a disproportional amount of money. So why should a smaller team be disadvantaged?

"We are not after hundreds of millions," he insisted, "we are looking for small amounts of money so that we can be financially more secure and can be more competitive.

"Bernie wanted to try to take the money from the big teams, the excess money they are given," a reference to the various bonuses agreed which see the likes of Ferrari receive more than championship winners Mercedes, "and give it to the small teams, but the big teams refuse.

"Equally it is open to the commercial rights holder to take something out of their pocket and distribute it among the smaller teams, that would not require any changes to any agreements.

"All we want is a more level playing field," he concluded, "and that is what we are fighting for."