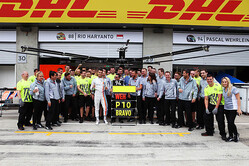 Several days on and we're still getting a kick out of bagging our first championship point of the 2016 season. Pascal Wehrlein and Rio Haryanto flew straight to the UK to celebrate with the hard-working boys and girls at Manor HQ, and to prepare for the next important occasion - our home Grand Prix at Silverstone.

Racing in our own backyard is incredibly special. It's a chance for everyone to see the team they helped build performing right in front of them. Our small army will be up there in the grandstands this weekend, contributing to the giant sea of Union Jacks that makes this event so iconic.

Pascal, it's been a whirlwind week for you since you scored the team's first championship point in Austria. Are you still savouring the moment?
Pascal Wehrlein: "Very much so. It's been a busy few days since we left Austria on cloud nine, but race day there is still very fresh in my mind. It helps that I've had so many interviews since, in which I've been able to relive it over and over. What was most special is being able to stand up in front of the whole team and thank them for all the hard work that got us into that position. I might be driving the car, but it's always a team effort. Not everyone can go to the races, so it's important to give them the same feeling we all had in Austria last Sunday."

What does it mean for you and the team?
PW: "Well, we always talk about taking advantage of every opportunity that might come our way, but actually getting into a position where you can make the race come to you is something else. Especially when you consider that I was last at one point. In that moment I was feeling pretty unhappy, which was a big contrast to how I felt at the chequered flag. It's been a tough start to the year for all of us and we needed a good result as a reward for that. We also 'deserved' that result, because we beat many teams and drivers who should really have been ahead of us. They're bigger and they have more resources. Obviously we need to finish at least 10th in the Championship - that's a more practical reality - but, emotionally, last Sunday was like a win for our team."

What are you expecting from this weekend in Silverstone? Another point to add to the collection?
PW: "That would be very nice but let's be clear - this is a different racetrack and a different weekend. At the last Grand Prix we seemed to have improved a few things things that were holding us back. We didn't suffer with tyre degradation as much as we have previously and our pace was strong - we were able to race for more than 40 laps on a single set of Soft tyres, which is a measure of just how well we got the car working that weekend. That doesn't automatically translate to the next circuit, or even the one after that, but if you can say you did everything right and got the maximum possible from the car we have, then that's a good result."

Rio, you don't have a home Grand Prix as such; Singapore is probably the closest. But how important is it to be racing on the team's home asphalt this weekend?
Rio Haryanto: "It will be a fantastic occasion; I can't wait. There's a real buzz about the team at the moment after the first point and that's incredible to see and feel. It's really important to me that we put on the best show possible this weekend for everybody who has worked so hard and contributed to that result in Austria."

That result is a reflection of progress across the whole team. Do you think that's something you can benefit from next?
RH: "Yes, I hope so. The race in Austria didn't go so well for me. Pascal and I were on different strategies, which is something that we do to give us both a chance of benefitting if the race circumstances come our way; that's the best choice for the team right now. But it's clear that the car was performing better overall. There were still some issues that need ironing out, for example the electronics glitch that hampered my progress for the first 15 laps. But yes, there are plenty of reasons to be positive and I hope to reap my own rewards for the team in the coming races."

Dave, big weekend for the team, with perhaps a little more expectation after a brilliant result last time out.
Dave Ryan, Racing Director: "Yes, it's great to be home. The British Grand Prix is always a fantastic occasion in its own right, but especially for the teams who are based here. The Manor Technical Centre is only 15 miles from Silverstone, so it's a rare opportunity for everyone who is normally based there to share in the race weekend experience. It means such a lot to them to see our cars and drivers perform right in front of them. I hope we can put on a great show for the wider team this weekend, but it's important that I temper expectations. We have to keep our feet on the ground and recognise that another point is not a given. What I can promise, however, is that we'll be doing our utmost to get the very best from the car and our drivers, just as we do at every event."

How does it feel to race in front of the home crowd?
DR: "The crowds here at Silverstone are among some of the most passionate and exuberant that we encounter. They want to see a British driver win the race, but they are equally supportive of the British teams, whatever their nationality of drivers. We know they will be cheering for Manor Racing and that makes a real difference - to the guys and girls in the team and to the drivers. It's going to be a great weekend and we're looking forward to it."