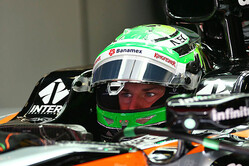 A day of unsettled weather in Albert Park resulted in limited mileage for Sahara Force India during the opening day of practice ahead of this weekend's Australian Grand Prix.

Nico Hulkenberg: "Really challenging conditions today with the wind and the rain. It was so gusty and the car was being moved around a lot by the wind, even on the straights. So the conditions were not the best for testing and learning. This morning we did a very short run on the soft tyres, but the track was very damp and so it was not really a representative dry run. Then, in the afternoon, we worked with the intermediates, getting a feel for the car in the wet conditions in case the rain comes back again tomorrow. So it was one of those slow days where you just had to make the best of it. Tomorrow is a new day so let's see what the weather brings."

Sergio Perez: "It has been a difficult day for everyone because of the changing weather. Just when it looked as though the track was starting to dry, the rain started again. So it was quite frustrating and we could not carry out all the testing we had planned. We made the most of the conditions and we looked quite competitive on the intermediates, but you can't read too much into the times because it depended on when you were out on track. We are still not sure what the weather will do tomorrow, but if it's dry then we will start from zero again and it will be a very busy day. If it does rain again, the set-up work we have done on the intermediates will be very useful."

Robert Fernley, Deputy Team Principal: "They say that Melbourne is a city where you can experience four seasons in a day, and based on today there is some truth to that expression! There were some very brief windows for dry running this morning, but neither Checo nor Nico carried out any meaningful work on the soft tyre. With a risk of more rain tomorrow we made the most of the afternoon session to run the intermediate tyre and looked quite competitive in the damp conditions. On days like this it's frustrating for everybody, not least the fans who didn't see as much action as they would have liked. I'm sure that as the weekend unfolds and the weather improves we can make up for the limited running today and put on a good show for everyone."