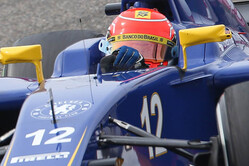 Sauber has revealed that its 2016 car, the C35-Ferrari, will not make its debut until the second Barcelona test.

As McLaren reveals that its 2016 contender will be unveiled on 21 February, the day before the opening pre-season test gets underway, Sauber has confirmed that its new car will not appear until a week later at the second test.

The team cites the late change to the calendar which saw the Australian Grand Prix brought forward two weeks from 3 April to 20 March as the reason for the late appearance which the Swiss outfit insists is a plan as opposed to a delay.

The Hinwil team, which retains Marcus Ericsson and Felipe Nasr, will not miss the opening test however, instead opting to run a revised version of the 2015 car, albeit with the 2016 livery.

With just two pre-season tests the majority of the teams are expected to skip the ‘traditional’ launch in favour of an unveiling before the press either on the morning of the first test or over the weekend beforehand.