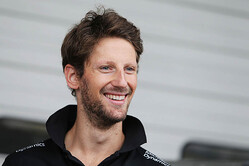 As he looks ahead to Austin, Romain Grosjean reveals his seat was shattered in Sochi crash.

The United States Grand Prix has particular relevance to Romain Grosjean this year given his future, so what are his plans to make it big in America?

Crash! Bang! Wallop! That was quite a big smash in Sochi - how are you feeling?
Romain Grosjean: I'm feeling pretty good, especially considering the force of the impact; I broke my seat! It was my biggest impact for quite a while and when I knew I was going to hit the wall I took my hands off the wheel, closed my eyes and braced myself. It's a testament to all the safety inherent in the car and the other safety devices, so a little thank you to Bell, HANS, Enstone, the circuit, the FIA and the marshals and medical personnel. Also a big thank you to my crew who had to pick up the pieces and put the car back together.

What do you think could have been possible prior to your E23 component rearrangement?
RG: We certainly had potential to be in the points, even after having to make a first lap stop to get a new front wing.

You're going to be spending a lot more time in the US in the future, what's the appeal?
RG: It's a pretty amazing country and there's so much to explore. The people are really friendly and it really seems to be a place of opportunity. Certainly it's a place with great opportunity for me in the future!

What about Austin?
RG: At the moment, the part of America I know the most is Austin for the Grand Prix, and it's a place that I - and I know, my crew, as well - really like to visit. Of course, the USA is such a big place which I would love to explore more and I'm going to get that wish fulfilled pretty soon!

What do you think of the Circuit of the Americas?
RG: It looks great and the first time I walked around it in 2012 I thought wow! The gradient up to turn one is really something and it makes for a fun first corner when you're in the car. It's a really well presented facility with an interesting circuit layout. It's great to be at a race where the local character is very evident and that's certainly the case in Austin, with the fan reception and the American way of presenting events.

What particular challenges does the Circuit of the Americas present?
RG: It's quite a balanced circuit in that you don't need one particular thing over another for the car to perform well. In the first year the challenge was finding the level of grip we want and we did see the same for the past two races too. Every year so far the race has taken place a little earlier, and that's good as it generally means warmer weather. This is good for many reasons, but wearing my race driving hat it's good as it helps with tyre warm-up and grip. Grip is something we've struggled with in Austin in the past, so a warmer circuit with a bit more aged track surface should help with that.

Is it true that you will ride to Austin on your Harley Davidson motorcycle?
RG: One year I will, but not this time! I borrowed one last year before the race and it was great to explore the area. I have my own custom Harley which is really a favourite of mine. They're obviously an iconic US machine so it was great to be able to ride one in its home country. I've said before that all the drivers should ride one for the parade lap - I think that would be pretty cool!

What can F1 do to be more appealing in America?
RG: Certainly it's becoming more popular since we returned and the event in Austin is perfect to lead this. We've heard talk - and more - about another race, or even a couple of other races, in the US and that would make a difference. A US Formula 1 team would be good, especially one with a French driver. That I can see working...

How are you approaching the final races of 2015?
RG: It's amazing just how quickly this season has passed, even if it's seemed a long, hard slog at times. We head to Austin, Mexico, Brazil and Abu Dhabi and then it's done! The season goes so quick. I'm certainly aiming for the best finale possible for Lotus F1 Team.

Pastor Maldonado gets ready to saddle up and go steal some points in America.

What are your thoughts on the Circuit of the Americas?
Pastor Maldonado: Austin is a great track, it's a challenging layout which is refreshing to drive and it's an enjoyable event. The first turn is quite something with its very steep climb and the rest of the lap flows well. The atmosphere at the circuit is really special, even for the first time we visited. It's great to see the RVs at the side of the track and people staying at the circuit to enjoy the full weekend. The circuit can be a difficult one for tyres. The event is taking place earlier in the year this season so hopefully there's plenty of sun to burn off any morning fog! Certainly, there can be a variety with the weather and in the past we've seen it be quite cold at the start of the day.

How about Austin as a place?
PM: It's really a fantastic location with a lot to do. It's certainly the type of city I'd like to visit even if there wasn't a race there! It's a really lively place with a lot going on. Great food, great music and great people are three things I think about when we go to Austin. The fans are superb too. It's only the fourth time we will visit Austin, but already it's one event on the calendar that we really look forward to visiting.

What is your feeling on America in general?
PM: It's a place I love and I have spent a lot of time in Miami.

What's your outlook for this race?
PM: I think Austin offers us a good opportunity. The circuit shouldn't pose any particular problems as long as we can get the tyres working as we want. The E23 is a car that generally works well so we have a good baseline to start with. At this point of the year we're pretty on top of things like set-up and getting the most out of the car so it's a case of getting the laps and simulations done in practice, qualifying as well as possible then targeting points in the race.

How was the Sochi debrief?
PM: It was a solid race for us and the car felt good. We weren't able to get the maximum from the super soft tyres in qualifying and also in the race they didn't reward us with all we wanted, but we were able to push quite well, especially at the end of the race. I was relieved that Romain was fine after his crash. These cars are strong, but it did look like he'd had a big one.

If you had to be a character in a western movie, what would your character be like?
PM: I think there are many people out there who would say I would make a good baddie! Certainly this weekend I'm looking to steal lots of points, so maybe that should be my character.

Last year saw your season-best qualifying position and race result; can we expect more of the same this year?
PM: Certainly, everything went relatively well for us last year in Austin when you compare the performance to the season we'd been having. There's no reason to say we can't have a great weekend this year. At every race we're looking to maximise the package we have; we always look to be as fast as possible in qualifying and finish the race as strongly as possible. I like the Circuit of the Americas, the E23 is a good racing car and I'm confident we'll do the best job we can.