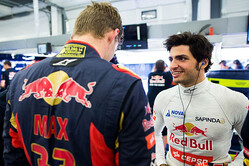 As Dietrich Mateschitz ponders whether to remain in F1 or simply walk away, his drivers do their utmost to put thoughts of the future to one side and focus on the present.

"There have been some rumours in the media and stuff like that," said Daniil Kvyat. "Obviously not the nicest things to hear about your own team, but you know, my job is to try to drive the car that I have as fast as I can and that's what I want to focus on first of all and the other things that are hanging in the air, as you said, I think they are up to other people in our team and I trust them 100 per cent, on what they are doing and I rely on them for these kind of questions, 100 per cent."

"To be honest, I don't know and I'm not really taking care of that matter too much," added Carlos Sainz. "As Dany said, I think we're here to drive and our job is to extract the maximum performance of our car.

"I just know that the team obviously is working hard, and now more than ever, to find something for next year. Obviously it starts to be a bit late and we need to design all the rear part of the car. When you don't have something at the rear at this stage of the year, it's a bit tricky - but I have full trust that they will come to a solution… to an agreement.

"I think Red Bull more than anyone deserves… they have done a lot for this sport, a lot for Formula One and they will end up having a decent engine, a decent package for next year."

Pushed a little harder, Kvyat, ahead of his home race, admitted: "If you look at it, what can I change? I can drive the car, I can try to put ourselves as high as possible at the finish of a race and then you have to be patient.

"Formula One is a rough world, you have to be patient, you have to consider it's a honeymoon at some point. The beginning of the year was very tough for us and then we started to climb, slowly but surely and we've been quite competitive in the last races, I think, so I think everyone has to be patient in the team and I think the right decisions will be taken in the future from our bosses. I'm sure... like I said I rely on them fully."

"We just need to wait, be patient as Dany is saying," added Sainz, "and trust that Red Bull is going to take the right decision and they're going to do the best, obviously, for the brand, for the team, for both teams and there is nothing that we can do. We are just sitting here, waiting but having 100 percent confidence in them and as I said before, Red Bull has done a lot for F1 and I'm sure F1 will end up giving them back a bit of what they have done for them. With all this, I'm pretty sure, hopefully that next year we can be here."