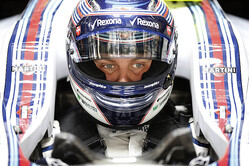 Valtteri Bottas finished fourth and Felipe Massa tenth in today's Bahrain Grand Prix. After a sensor issue on the final fire up caused Felipe's power unit not to start he was forced to start from the pitlane. Felipe fought his way back up to eighth but, struggling for pace due to damage sustained after being hit in the early stages, he dropped back to tenth in the final laps. Valtteri made a clean getaway from the grid and after holding P5 for the majority of the race, he was able to capitalise on Sebastian Vettel's unplanned pitstop for a new front wing, holding off the Ferrari successfully for 17 laps to take fourth.

Valtteri Bottas: I am pleased with the race and happy with fourth position. It was a real shame for the team that Felipe had an issue at the start. It was a lonely race but the final 20 laps were very tough. Sebastian was quicker than me, and closed up behind very fast, but the fight was really good fun. I know a few tricks that can really help to defend and they all worked today, and I am delighted to come out on top today.

Felipe Massa: It was a frustrating day for me to have to start from the pitlane. The car struggled to fire-up and once under way I had a lot of positions to make up. A few laps in at Turn Four, Maldonado ran into the back of me and damaged something. From then on I really struggled with the rear and the car was very hard to drive. It was a difficult day but one point is better than nothing.

Rob Smedley, Head of Performance Engineering: It was a race of two halves today for us. Felipe had a sensor issue on the grid and we struggled to return from that. In the end Felipe drove a great race to fight back and bring the car home with a point. Valtteri had a great race as we managed to capitalise on Vettel's mistake and he did a brilliant job to hold off the Ferrari for 17 laps in the closing stages. Overall, our targets are being met in terms of Championship position but we need to develop the package quicker to catch the cars in front.