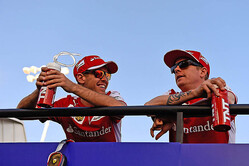 It's hard to believe we're actually writing this, but Bahrain could be on the verge of dishing up a thriller for the second successive year.

Last year we were kept on the edge our seats as Lewis Hamilton and Nico Rosberg finally took the gloves off, this time around the Ferraris, and possibly even the Williams, drivers are very much in the mix.

The record books will show that Hamilton took his fourth pole of the year, but he was pushed hard by Sebastian Vettel. We also know that on Friday and Saturday, in similar conditions, on long runs the Ferraris were actually quicker than the silver cars.

If ever a picture was worth a thousand words it was that of the post-qualifying official shoot and, to a lesser extent the press conference. Despite insisting that his teammate has not got inside his head Nico Rosberg looked broken, totally crestfallen.

Coming a week after China, and that followed, this is crunch time, this the moment the German either gets back on his bicycle or caves in, admitting that he simply doesn't have the wherewithal to beat the Briton.

Indeed, even without the threat from Maranello and Grove this could be a thriller.

Somewhat unfairly, we feel, Kimi Raikkonen has been told to up his game if he wants to be retained by Ferrari for 2016, this despite the fact that it was poor pit work that cost him a strong points finish in Australia and poor strategy that left him on the back foot in Malaysia. This could be a perfect opportunity to get his title attack finally underway.

Good also to see the Williams pair finally showing some of the pace we saw at the end of 2014, Bottas out-qualifying Felipe Massa for the first time this season. Though we don't expect to see them take the fight to Mercedes and Ferrari we expect a healthy points haul and the possibility of benefitting from any silliness or technical failures out front.

Daniel Ricciardo gave another epic performance in qualifying, totally flattering the Red Bull-Renault package, whilst teammate Daniil Kvyat is having the weekend to forget.

At Force India, Toro Rosso and Lotus one driver succeeded whilst his teammate failed, Nico Hulkenberg doing particularly well to get into Q3.

Lotus might well have had both cars in the front five rows but for a brake issue that hampered Pastor Maldonado. Nonetheless, we expect to see the Venezuelan give a typically 'strong' performance today.

Whilst Max Verstappen continues to get the column inches and photo opportunities, Carlos Sainz quietly gets on with the job, Toro Rosso clearly having discovered two very talented young men.

Down in 12th and 13th, Felipe Nasr and Marcus Ericsson have a long afternoon ahead of them, but it's still a lot better for Sauber this time around than last year.

Hands on hearts, we haven't been on the sauce, but we're really beginning to believe some of the things Fernando Alonso and Jenson Button keep telling us. Whilst the Briton, in particular, has had a nightmare weekend, thus far, we can see signs of those green shoots of recovery. It won't happen overnight, but we do believe once the European season gets underway the improvement will be noticeable race by race.

The Manor boys will be glad just to get to the flag, looking forward to the new car (late summer) and those circuits (Monaco?) where they might benefit from others mistakes.

Tyre strategy will be similar to China - where the medium and soft tyres were also used - in that three stops is theoretically the fastest strategy, but two stops is more likely. The predicted total race time difference between the ideal two-stopper and ideal three-stopper is only 0.6 seconds, but in reality the need to deal with traffic would most likely make the two-stopper quicker.

The pitlane opens and one by one the drivers head out as the sun slowly sets and the shadows lengthen.

The big question is whether either Mercedes or Ferrari will seek one of its drivers to ride shotgun for the other, and whether the second driver will comply.

Sadly, one of those not heading to the grid is Jenson Button, McLaren having discovered a late ERS issue that compromised the safety of the car. A lousy end to a rotten weekend for Jenson and indeed the team, which, incidentally, has yet to issue a comment.

Ahead of the national anthem, the air temperature is 26 degrees C, whilst the track temperature is 31 degrees. It's windy but nothing like yesterday afternoon.

Maybe it's the lack of garish, vulgar architecture, but the whole night race scenario looks a lot better here than in Abu Dhabi.

At 17:50, McLaren tweets: "Sadly we are not able to ready Jenson's car. During fire-up, data indicated an issue originating from his earlier electrical problems."

Jenson Button will not race in today's #BahrainGP and we'd like to thank the #McLarenHonda engineers who worked tirelessly on the car," adds Honda.

So now you know.