Merhi to partner Stevens at Manor 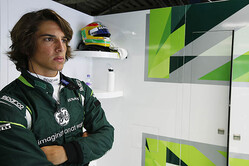 Manor Marussia has announced that Roberto Merhi will partner Will Stevens in the opening rounds of the 2015 season.

The Spanish youngster, who drove in a number of FP1 sessions for Caterham in 2014, said: "I am incredibly excited to be making my Formula 1 debut with Manor Marussia F1 Team in Melbourne this weekend. It is a big responsibility but I feel ready to make this step in my career and to show that I can make an important contribution to developing a team."

Also announced is the team's new Development Driver, Jordan King. The 21 year old Briton, who will compete in the 2015 GP2 Series, will combine his regular racing role with test duties for Manor in order to begin the steady progression towards his longer-term ambition of a Formula 1 race seat.

"I am obviously over the moon to be joining Manor Marussia F1 Team as a development driver," said King. "This is such an exciting project, full of great people and with a real chance of success. This is another great step closer to my ultimate goal of racing in Formula 1."

"It is fantastic to welcome Roberto and Jordan to the team," said Team Principal, John Booth. "Not only are they very talented young drivers with exciting futures ahead of them, they have also been 'graduates' of Manor Motorsport in the junior formulae, which is obviously very rewarding for us, given that the development of young talent is an important part of our philosophy."