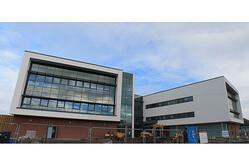 The neurosurgeon from Liverpool, who passed away in 2012, and was at the forefront of Formula One safety for more than 30 years, has been given a permanent tribute in the naming of a new Merseyside hospital building.

'The Prof' has been recognised by specialist neuroscience hospital The Walton Centre NHS Foundation Trust, with the naming of the Sid Watkins Building. The new three-storey building which will open in January 2015, will house the Trust's complex rehabilitation unit; pain management programme and medical training facilities; and Mersey Care's brain injuries unit.

"Professor Sid Watkins was one of the greatest men of medicine that I have ever encountered," said Jackie Stewart. "His dedication to constantly finding new ways of doing things, to give people another chance to enjoy life, was a huge asset to both the world of medicine and to those who were fortunate enough to have his help and talent to provide life.

"Professor Watkins' contribution to saving the lives of many people in motorsport will never be forgotten and it's absolutely appropriate that this new development will assist in ensuring that Professor Sid Watkins will be remembered forever, by the naming of this excellent facility in his honour."

"My husband would have been proud to know that his name has been attached to this rehabilitation facility," added Mrs Susan Watkins, "both its calibre and scope reflect his own attitudes to patient care, and his concern for the ongoing needs of those who suffer from neurological diseases and injuries requiring long-term treatment. In this way it is a reflection of his life's work and, in a sense, brings him home to his roots in Liverpool."

Professor Watkins was an innovative surgeon who pioneered several frontiers in his specialty, including brain and spine stimulation, the surgery of pain and Parkinson's disease, as well as trauma.

He was also fundamental to the development of the Royal London Hospital's helicopter emergency service and the first emergency brain scanning unit, both of which were subsequently mirrored at other major hospitals.

In parallel with his prodigious medical career was his work in F1 where he radically improved not only the safety of the sport but also established methods by which sport around the world tackles risk. He did so by working with individuals from various disciplines and by a sustained effort over several decades.

Outside F1 his work continues to deliver safety benefits in sporting activities as wide ranging as horse trials and rally car events, and his leadership in safety research has ultimately led to changes in the design of all cars.

The neurosurgeon was a close friend of the legendary three-time champion, Aytron Senna. Following Senna's death in 1994, he was appointed Chairman of the FIA Expert Advisory Safety Committee and ultimately became President of the FIA Institute of Motor Sport Safety, a role that allowed him to guide research in the design of racing cars and circuits as well as drivers' equipment - among other innovations - all with the aim of improving safety.

He initiated trackside medical care at every F1 race and in testing, along with providing state-of-the-art medical buildings and equipment. In addition, a corp of medical and surgical experts were incorporated into Watkins' safety concept, so that injured drivers, circuit personnel and even spectators now receive the best possible medical care at circuits around the globe.

"I am delighted that Mrs Susan Watkins, has allowed us to recognise her husband in this way," said The Walton Centre's Chief Executive Chris Harrop.

"He is a legendary figure and inspirational to doctors here and around the world. It is very fitting that our new building is providing fabulous facilities for patients recovering from brain injuries and illness; and for training junior doctors aspiring to be the next Professor Watkins."

In association with the naming of the new building the hospital has also launched a 'Sid Watkins Fund' to support innovation and enhancements in the diagnosis, treatment and care of neurological injuries and illnesses.