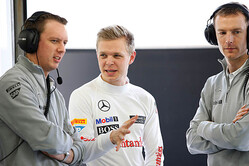 The relentless twists and turns of the Hungaroring provide the teams with a tricky final challenge ahead of Formula 1's annual summer break. The 4.381km track is notoriously difficult to overtake on, but the drivers relish its demands and the vibrant city of Budapest, just 12 miles to the south, provides a perfect foil to the on-track action.

The Hungaroring was the first racetrack in the world to be built specifically for Formula 1. It was constructed in just nine months ahead of its inaugural race in 1986, and it's been the permanent home of the Hungarian Grand Prix ever since.

The 4.3km track is the slowest permanent circuit on the 2014 calendar, with an average speed of just 190km/h. There are no long straights and no high-speed corners, and four of the 14 turns are taken at speeds below 100km/h. Only 55 per cent of the lap is spent at full throttle, placing an emphasis on the mechanical grip generated by a car.

The track is rarely used away from the grand prix weekend; as a result, it's very dirty at the start of Friday practice. The asphalt cleans up quickly, but if it's windy, dust from the surrounding countryside gets blown onto the track and it can remain slippery off-line all weekend.

There are two DRS zones this year, located on consecutive straights at the beginning of the lap. This should help overtaking, but a good grid position will remain crucial because the track is narrow and it's relatively easy for a driver to defend his position.

Pirelli are taking their Soft (Option) and Medium (Prime) tyres to the race. The abrasive track surface and high track temperatures, which are expected to exceed 50 degrees, will provide hostile working conditions for the rubber, which is why Pirelli are not taking their softest compounds to the race, as they did at the Santander German Grand Prix last weekend.

McLaren has an enviable record at the Hungarian Grand Prix, having won the race 11 times and taken six victories in the past nine years. Jenson Button scored his maiden Formula 1 victory at the circuit in 2006 and Kevin Magnussen has enjoyed success at the track in junior formulae.

Hungaroring - All the stats you need

What makes it special: Three things: the unrelenting nature of the track, the enthusiastic fans and the vibrant city of Budapest just up the road

Track abrasiveness: Medium. The asphalt is predominantly old and worn, but large sections have been re-surfaced in recent years and these areas are smooth

Fuel consumption: Medium. Only 55 percent of the lap is spent at full throttle, but there's a lot of stop-start

Brakewear: Medium. There are 11 braking events around the lap, the heaviest deceleration being 5.05g into Turn One

Weather: Hot. Cooling issues can be a big factor

DRS zones: Two - one on the approach to Turn One, the other on the run to Turn Two

Turbo effect: Medium. There are minimal incidences of full-throttle, but many hard bursts of acceleration from low-speed

Grid advantage: It's very dusty off-line, making the left-side of the grid - the racing line - much grippier

Pitlane time: It's a short pitlane, taking just 18s to complete a stop

Jenson Button: "As you know, this has been a special place for me for some time. I won my first grand prix here back in 2006 - it was one of those day when everything seemed to go my way - and I won my 200th grand prix here. That was an emotional day - and it was back in 2011 - I can't believe it was nearly 60 races ago.

"The Hungaroring is a great track. Everybody thinks of it as a slow circuit, but, out the back, it's got some pretty decent corners - Turn Four requires some serious commitment, and it's made harder because it has a blind apex. Equally, the sequence of S-bends that make up Turns Eight to 11 are really satisfying to drive. Nonetheless, it's still a circuit where you require lots of downforce and grip, and I think we are making positive steps in that direction."

Kevin Magnussen: "I really like the Hungaroring. It isn't a fast circuit but, a bit like Monaco, it's a track on which a driver can really make a difference. I raced there last year in World Series by Renault 3.5 - and, although I didn't win either of the two races we had that weekend, I really enjoyed the first of them in particular.

"Qualifying had been messed up for many of the drivers, owing to torrential rain, and I ended up 16th on the grid. From there I got it all hooked up really well on race day, which was also extremely wet, and I overtook a load of cars as I worked my way up to second place at the end. It was great!

"I think we've shown recently that our car performs slightly better on tracks with a combination of low- and mid-speed corners, so I think this weekend will hopefully offer us another opportunity to score some useful world championship points. After a couple of frustrating races, I'm hoping for a weekend where everything comes together."

Eric Boullier, Racing Director: "McLaren has a fantastic record in Hungary - we've won 11 grands prix there - and, while it's unlikely we'll be in a position to win this year, I think we travel to Budapest feeling encouraged by a number of our recent performances. We know there's still a lot to do, but there's a feeling that the whole team's motivation is growing.

"This is effectively the last race of the first 'half' of the season: Formula 1 takes a short break for the summer before we return for the final few races in Europe, then the long and intense series of fly-aways that end the year.

"It's always beneficial to go into the summer break with a positive result, so we'll be trying hard to do just that; even more important, it's essential that we maintain our focus and determination with regard to car development. The next six months will be critical for everybody at McLaren, and we'll be working as hard as possible to keep on pushing."