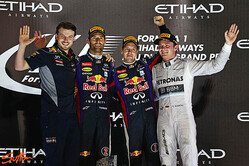 Widely condemned as a gimmick too far, the head of the Yas Marina circuit which will host the 2014 season finale has defended the decision to award double championship points for the race.

Since it was first announced the move has been widely condemned by fans and many drivers, all insisting that it is a deliberate attempt to stage manage the world championship whilst at the same time suggesting that one race is more important than others.

On the other hand, many others within Planet Paddock are said to be in favour of the move, Mercedes boss Toto Wolff admitting that he was surprised by the fans reaction, even though, in a pre-season promotional video, his drivers mocked the proposal.

Speaking on the day that tickets for the event go on sale, circuit boss Al Tareq al-Ameri defended the move.

"The fact it came to us, that's good for Abu Dhabi, it will keep things exciting to the last minute, I feel the mentality of the drivers will change," he told a press conference.

"People don't like changes, but for a sport like this, from the history, there are always changes happening with Formula One and that's what keeps it exciting.

"For the fans that follow the F1 championship it's not about determining who is the champion at what round, they stick with it all the way through," he added, whilst revealing that capacity for the race will be increased by 5,000 to 60,000... not doubled. "It's an exciting event for them and I think each round by itself provides a unique proposition."

It almost begs you to hope that Mercedes (or whoever) wraps up the title by Austin or Interlagos, doesn't it?