No further action on Kvyat/Alonso incident 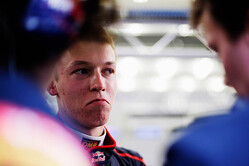 Stewards are to take no further action regarding the incident involving Fernando Alonso and Toro Rosso rookie Daniil Kvyat.

In fact there were two incidents involving the pair in Q2 as the conditions deteriorated once again having eased slightly in Q1. In the second the Russian appeared to carry too much speed in to T9 as he went to the inside of the two-time world champion. The Ferrari coming off the worse of the two, as the red car limped back to the pits out came the red flags for the second time.

"The visibility was very poor for everyone and I think he didn't see me and in the end, he turned into me," said the Russian. "I think it was quite normal that he didn't see me because there was so much spray."

"The incident was unfortunate for both of us and was inevitable," said a remarkably philosophical Alonso, "because by the time I saw the Toro Rosso it was too late. As usual in the rain, visibility is significantly reduced and it becomes a lottery."

Having seen the video evidence and heard from both drivers the race stewards were equally understanding stating that they didn't believe either driver was wholly or predominately to blame
for the incident and opting to take no further action.