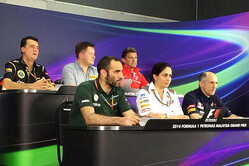 Cyril, can I begin with you? You did a lot of mileage in the pre-season testing but it's not been so good when it's come to the actual action, in Australia and again today. Can you give us an idea of what the problem is?
Cyril Abiteboul: Yes. To be honest we are the first one to be a bit surprised buy the situation. It's true that were quite happy with the situation after the test but I think it demonstrates that it's still a little bit random. It's a bit random for everyone, for all parts of the car, whether it be chassis, gearbox, engine. I think we are just demonstrating that given the number of new things that there are on this car, given the regulations, they do not really send a warning before they hit you and unfortunately they are hitting us more during the season than they were hitting us before. So I mean let's see. We are trying to stay calm, to take things as they come. Obviously we are not in the best position to prepare the weekend. But despite that we managed to have a good recovery last race in Melbourne so hopefully that happens again, even though I don't want to try my luck too much.

Specifically there were some problems with Kamui with the power unit in Australia, Was that the problem again today for him? No running at all for him.
CA: Yeah, it was a mix. It started with some issue related to the power unit and it actually continued with some issues that are more related to the clutch and gearbox. I don't want to comment too much. It's all the systems, all the complex systems that are on the car, in addition to the difficult serviceability of the modern cars that makes our life extremely difficult - not just us, pretty much everyone on the grid.

Thank you for that. Coming to Federico Gastaldi from Lotus, the new Deputy Team Principal - congratulations. It's not been an easy couple of races for you either, particularly today once again troubled running. What's the situation?
Federico Gastaldi: Well we've been having problems with the mapping in P1 and then Pastor's turbo blow out and we had to change the engine. We are working very, very hard with Renault trying to find out solutions for the weekend and to move forward for the next race as well.

You're the Deputy Team Principal. Can you tell us what your role actually means in terms of what you do back at Enstone and how you relate with all the rest of these people here and the FIA and FOM? What's your role?
FG: Actually we have a new CEO and we have... the Team Principal is Gerard Lopez the chairman of the company. For the time being I will be looking to the relationship between the team and FIA, FOM and again all the partners and sponsors, during the races that Gerard is not here.

Paul, coming to you? There was some talk on the radio in the second free practice session about some tyre degradation for one or two teams. What is the objective of what Pirelli is looking to achieve this year with the tyres and how they affect the racing?
Paul Hembery: It hasn't really changed, the input that we've had from the teams and the promoter in that we're aiming to have races of two stops, maybe three in some cases and to create that you're going to create a thermal degradation otherwise you won't have the stops we're searching for. But it was important this year that we did some work on trying to move towards less marbles on the circuit although we did a bit track cleaning today so it was quite messy, the first session. And also that the tyres life has increased. From the data we have seen so far, we appear to be in that right directions. Of course it's all very new for the teams. It's new for us as well, understanding what the real impact on the tyres and the car combination will be and it's only now that we're starting to see the teams working more on what to do with the tyres and what will eventually be part of their race strategy.

Of course you've got the first of the new two-day, in-season tests coming up in a couple of weeks' time. Can you tell us what's planned and what the focus will be?
PH: We're looking to nest season essentially and trying to evolve the product going forward in the future. We have a moving target - the cars this year it's suggested will develop at twice the rate of a normal season, maybe that's up to four seconds. So we have to take that into account when we're looking at what we're doing going forward. So we're trying to always develop things to have available if and when they are required. We'll see how we get on but clearly there are still some issues with the teams' running, so I think to do testing after a race will be a big challenge for all involved but we have to be also realistic in our aims.

Coming to Monisha. In what sort of mood does Sauber enter the 2014 season?
Monisha Kaltenborn: Well, in an optimistic mood because when you look at last season, were we ended, we could see that we did bring a certain change into our performance and it wasn't looking that bad. Of course we know that this year is very new, particularly with the rule changes, and we are confident that in many areas, particularly reliability, we are pretty much where we want to be. We are not happy with the overall performance, but we have identified the areas and step by step we are moving ahead and implementing the measures.

And how did today go for you?
MK: It was pretty alright. I think the engineers got through their programme. Again, we're not quite happy with the long run and we need to do a bit of work on that. We know that we can't do miracles and take a huge step compared to where we want to be and where we are but step by step I think we'll get there.