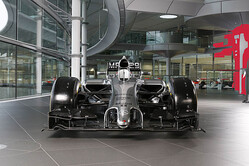 McLaren has unveiled its striking 2014 contender, the MP4-29 online, just four days ahead of the opening pre-season test.

Gone are normally aspirated engines - a Formula 1 mainstay for a quarter of a century; in their place come 1.6-litre V6 power-units, which sophisticatedly integrate turbo-charging and turbo-compounding, fuel-flow restrictions, and a powerful energy recovery system.

These new regulations will enable teams to harness both traditional internal combustion and electrical energies. They further underline Formula 1's relevance as a pioneer of future road car technologies, represent the biggest and most dynamic change to the sport since its inception in 1950, and are duly destined to re-shape grand prix racing.

McLaren, too, faces a period of dynamic change: the organisation has not only embraced the extreme technical and strategic challenges posed by the new regulations, it has simultaneously been growing and developing ahead of even bigger and more exciting future partnerships.

We have responded to the disappointment of our 2013 season by pragmatically framing our approach to the technical challenge. The new MP4-29, revealed today, is a sensible and calculated response to the new regulations.

But it is very much a frozen snapshot of the design team's steep development curve, and, as such, a machine that will potentially undergo more technical change throughout a single season than any other car in McLaren's long and illustrious history.

The challenge for 2014 is to build-in both performance and reliability - something that can no longer be taken for granted given the steep technical challenge ahead.

And that is entirely as it should be: for this season will be Formula 1's steepest-ever learning curve.

It is also a time of transition. Our final season with our engine partner, Mercedes-Benz, will be our 20th together, before we begin an exciting new journey with Honda from 2015.

Jenson Button, the 2009 Formula 1 World Champion, remains for his fifth season at McLaren. For 2014, his experience, level-headedness and innate ability to read the behaviour of a racing car will be a powerful asset to our engineers, designers and analysts.

Kevin Magnussen arrives in Formula 1 with a stunning record in Renault Word Series 3.5, grand prix racing's feeder series, and, crucially, no preconceptions. Having already devoted hundreds of hours to refining and developing our 2014 car in the McLaren simulator, his eagerness and commitment will sync perfectly with Jenson's experience, providing us with a perfectly balanced driver pairing.

McLaren is leading the evolution of sports partnerships. The breadth of the McLaren Group's experience and expertise presents a wealth of opportunities for innovative technical integration with our partners, which can have an impact way beyond the racetrack.

Whether it be extensive engagement with ExxonMobil to develop new lubricant technology, which can help McLaren Mercedes cars on the grand prix circuit, and ultimately improve the efficiency of consumer cars; developing new lightweight coatings with AkzoNobel; or working closely with SAP to develop and implement innovative data analytics techniques, our work with partners goes way beyond what can be described as sports sponsorship.

Our strategic partnership with GSK is now also in its third year and is breaking new ground from manufacturing to pharmaceutical R&D. Race technology is helping to improve the delivery of experimental trials into new medicines. Working with GSK we are using telemetry systems, which are inspired by the way we monitor our cars, to collect real-time data about the recovery of patients taking part in drug trials. These are at an early stage, but in future it's hoped that being able to take a constant stream of reliable information about a patient could significantly enhance the already robust process of drug evaluation.

Our commitment to innovation and creativity does not stop with technology projects, but extends to the implementation of marketing campaigns with and on behalf of our partners. Santander recently announced a renewal of their major eight-year partnership with us, and this reflects the continued impact that our creative marketing campaigns can have.

The depth of trust and respect we enjoy with our partners has allowed us to extend record-breaking relationships with the likes of Hugo Boss (33 years), TAG Heuer (29 years), Kenwood (24 years), ExxonMobil and Mercedes-Benz (20 years) and SAP (16 years), Johnnie Walker and Hilton (nine years).