Return of the Mac... boss 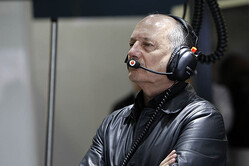 McLaren has announced that Ron Dennis has been appointed CEO of the McLaren Group replacing Martin Whitmarsh.

A brief statement, issued hours after Bernie Ecclestone stepped down from his position on the board of F1, read as follows:

Following his appointment, Mr Dennis said: "My fellow shareholders have mandated me to write an exciting new chapter in the story of McLaren, beginning by improving our on-track and off-track performance. Over the coming weeks I intend to undertake a thorough and objective review of each of our businesses with the intention of optimising every aspect of our existing operations, whilst identifying new areas of growth that capitalise on our technologies, and where appropriate further investing in them.

"During February, I will articulate a new Group strategy and implement the organisational structure best suited to achieving it. I am excited by the prospect of returning to the role of Group Chief Executive Officer and working with my many colleagues and fellow shareholders to fulfil our objective - which is to win at whatever we do."

In a subsequent move, Dennis addressed the entire Woking workforce, telling team members "there will be change" and "we will win again".

With the team yet to announce who will replace Vodafone as title sponsor, and anticipation already building ahead of 2015's partnership with Honda, there is already speculation linking Ross Brawn with the team, Dennis admitting in December that he had talked with the former Mercedes team boss.

A revived McLaren with Dennis back at the helm will no doubt lead to all manner of other speculation including the return of Fernando Alonso, the Englishman having admitted last year, contrary to what many believe, is that he wouldn’t have a problem in re-hiring the Spaniard despite the events of 2007.

With 'assistance from Marlboro, Dennis purchased 50% of McLaren at the end of 1980, and became joint managing director along with Teddy Mayer. Within 18 months Dennis was in sole charge.

During his reign, the team - which relocated to Woking, Dennis' home town - became one of the most successful in the history of the sport.

Dennis stood down as team boss in 2009, part of the fall-out from the infamous Spygate scandal which saw his team fined $100m and excluded from the championship.